Three’s a charm with third giraffe youngster born this year 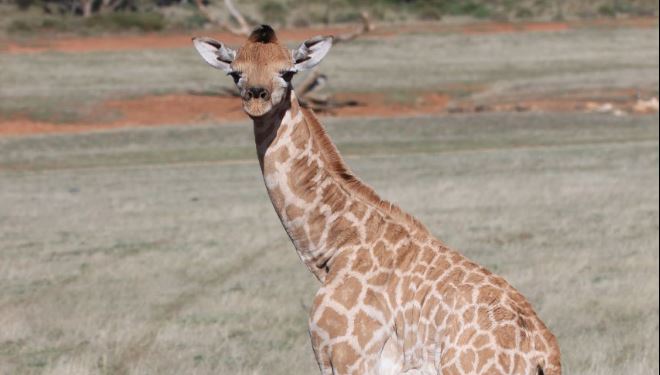 Three’s a charm with third giraffe youngster born this year

We are thrilled to announce the birth of yet another adorable giraffe calf at Monarto Zoo – the third youngster this year!

Born late in the afternoon of Saturday, 9 December, the little boy is the first calf born to mum, Korongo.

Giraffe keeper Vaughan Wilson said the bundle of joy was settling in well with the rest of the group, joining one of the largest giraffe herds in the country, with 12 giraffe now calling Monarto Zoo home.

“The little one has been busy getting to know the other giraffes in the herd, especially the two other youngsters who are very keen to play,” Vaughan said. 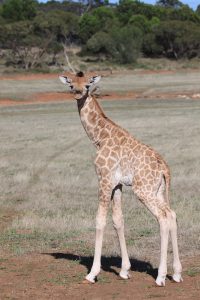 “The older giraffes are fascinated with the new arrival as well. There has been a lot of sniffing going on and they are watching the young one very closely.

“Of course doting mum, Korongo, is always looking on to make sure her baby is safe and happy.”

The 10-day-old baby is already bringing joy to visitors who have been lucky enough to see it exploring its home in the waterhole exhibit.

“We’re very excited to have another baby join our herd,’ Vaughan said.

“Giraffe calves are very cute so we are expecting lots of people to welcome our newest baby to the zoo during the summer holidays.”

Monarto Zoo is proud to be the most successful giraffe breeding facility in Australasia, with the not-so-little baby marking the 43rd calf to be born at the zoo.

Classified as vulnerable to extinction in the wild, the new calf is an important contribution to a breeding program working to secure the future of the world’s tallest animal, which looks uncertain in the wild.

This startling and devastating decline saw the giraffe reclassified as vulnerable to extinction last year by the International Union for the Conservation of Nature (IUCN).

“Sadly, giraffes are having a tough time in the wild, so the addition of three giraffes to the herd this year is incredibly important,” Vaughan said. 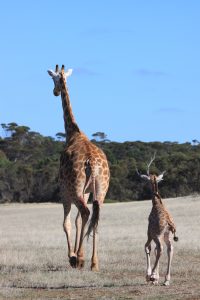 “Our giraffes have an important role to play in helping us raise awareness for the plight of their wild cousins, and will one day hopefully become part of our breeding program and have calves of their own.”

The baby joy is set to continue at Monarto Zoo, with another giraffe, Thula, due to give birth in the coming weeks.