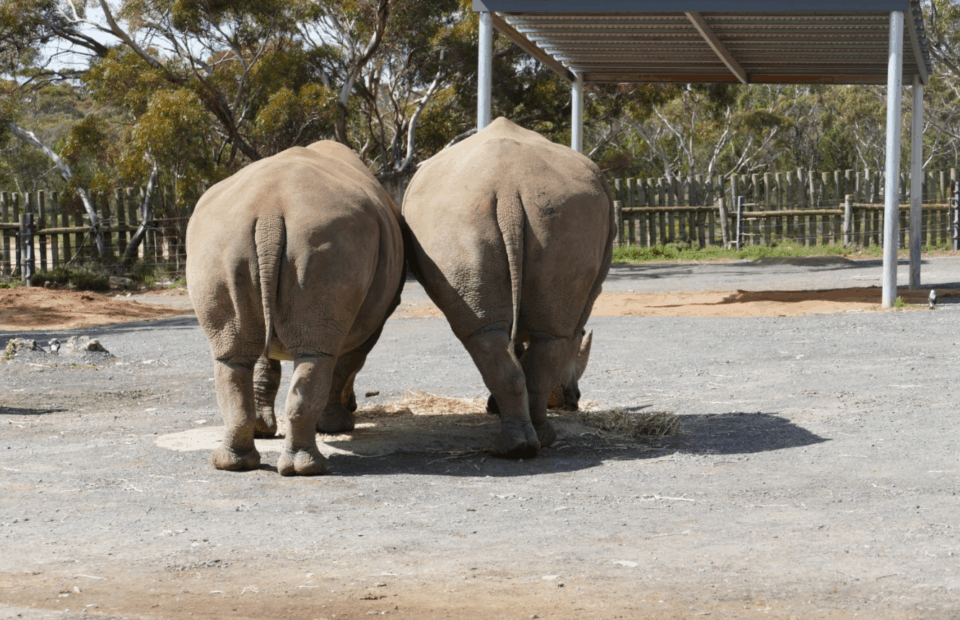 This World Rhino Day, Zoos SA is asking its followers to take part in a guessing game – identifying the name and species of rhinos at Monarto Safari Park using only pictures of their rears and ears! Keeping staff also revealed exciting new updates on the Southern White and Black Rhinos.

“While the quiz is fun, World Rhino Day itself is a far more serious matter,” says Peter Clark, Director of Monarto Safari Park.

“This is the tenth anniversary of World Rhino Day and over that time close to ten thousand Southern White Rhinos have been killed.

“The international rhino horn trade is still rife due to its alleged and unfounded medicinal properties.

Keeper Haidee Kinter shared the latest news about the Southern White Rhinos: “A few months ago, we started breeding introductions with Southern White Rhino between male Satara and two of our females. We hope to continue our efforts to build an insurance population.”

To ensure a future for the Southern White Rhino species, Zoos SA is working with The Australian Rhino Project, Taronga Western Plains Zoo and Orana Wildlife Park to bring 30 rhinos from South Africa to Australia, with the first arrivals (COVID permitting) in South Australia in mid 2023.

Having started in 2011, the tenth World Rhino Day is an opportunity to think and learn about the five species of surviving rhino.

As well as the competition to name the rhino and species; with a Meet the Rhinos experience as the prize, Zoos SA is also asking people to send in their own photos of the rhinos at Monarto Safari Park and in the wild for sharing on social stories throughout the day.

All visitors and members to Monarto Safari Park are asked to book in advance, particularly with the school holiday period approaching. Zoos SA also asks visitors to kindly follow all guidance concerning social distancing and mask wearing. Head to www.monartosafari.com.au/tickets