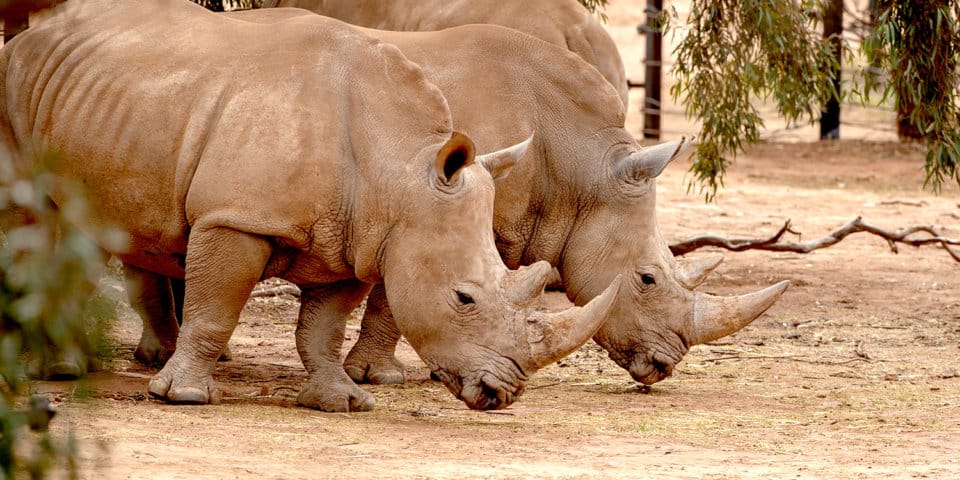 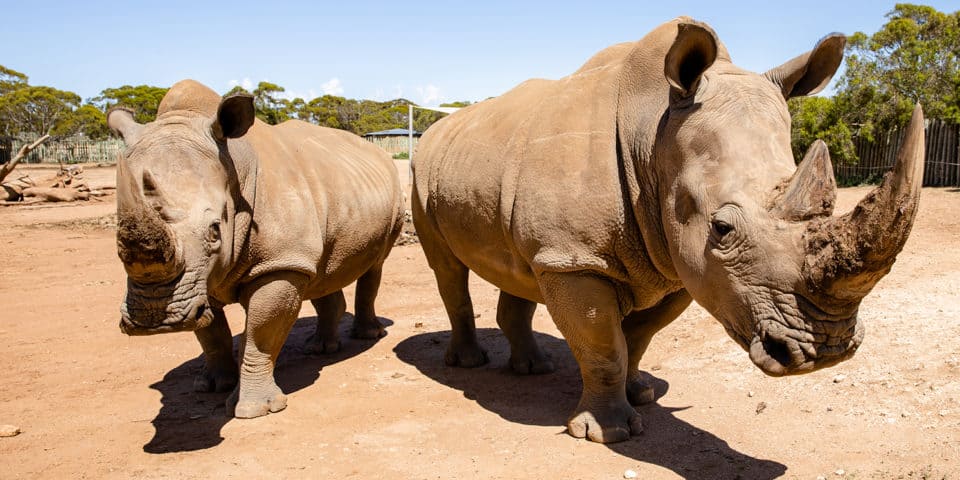 Get up close to our rhinos during the 11:45am keeper talk

Females Uhura, Umqali and Savannah are housed together, and these females have produced 7 calves at Monarto since 2005. For roughly the first six months of their life rhino calves gain weight extremely rapidly, at a rate of around two to three kilograms a day. This astonishing weight gain means that zoo keepers are able to literally watch the calves grow before their very own eyes!

Monarto’s breeding bull Umfana, arrived at Monarto Safari Park in April 2022 from Taronga Western Plains Zoo in Dubbo. Originally from Kruger National Park in South Africa, yhe importation of wild born rhinos was an important addition to the regional population as it injected new genetics into the region.

Ibutho, our other rhino bull, is housed separately in our Wild Africa precinct as adult males are very territorial. Ibutho is the first rhino to be housed in Wild Africa, which eventually will be home to several groups of rhino living in huge areas of established pasture. These animals will become one of the flagship species of this exciting new development, being housed in the largest safari-style habitat in the world outside of Africa.

Southern White Rhinoceros roam the southern half of the African continent, in savannah and grassland habitats

The White Rhino is one of the largest land animals and have the biggest horn of all rhinos! Their physiology closely resembles that of zebras and horses, having the same basic digestive tract (single-chambered stomach).

Bulls are solitary and establish territories by spraying urine and producing large faecal middens. Bulls will defend their territories from other males, which may choose to contest a particular male for the dominance of an area. While females usually live in small groups containing young adults.

There is an estimated 10,000 wild rhinos. One of the biggest threats to the wild population is poaching for the international rhino horn trade, which commands a high value on the black market for alleged medicinal purposes. This illegal trade has seen the incidence of poaching escalate hugely over the past ten years.

Rhino horns provide no proven medical benefit; the horn is made of a protein called keratin, which is also what makes up skin, fingernails, hair and hooves. This alleged cure for a range of medical aliments has resulted in needless death of hundreds of rhinos.

Start your day the best way – by meeting the Southern White Rhino crash! With three females and one...

‘Did I tell you about the time I patted a rhino?..’ Get up close to magnificent Black Rhinos and...

Love rhinos? Join our crash and ensure rhinos stay a stampede ahead of extinction! There are many ways you can help support these powerful giants.