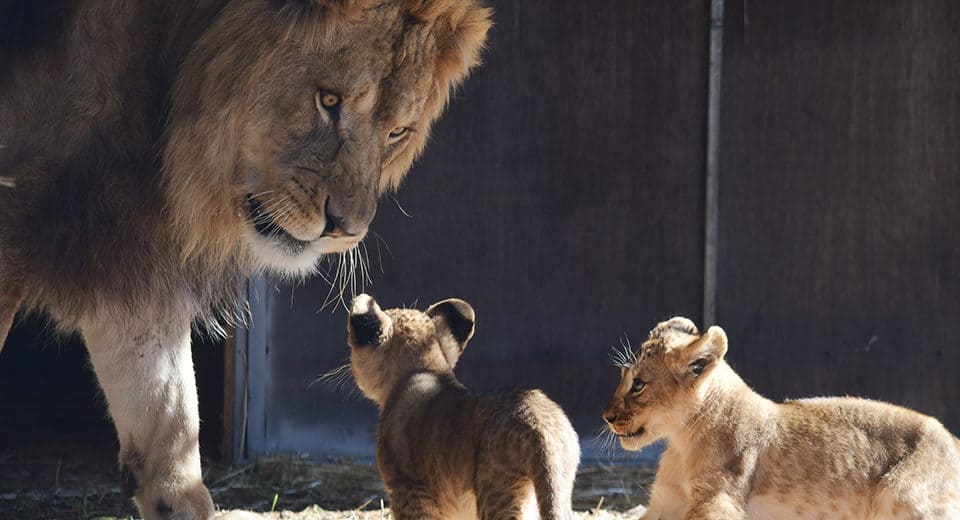 Keepers at Monarto Safari Park are celebrating the successful meeting of their three male African Lions and four adorable cubs, allowing all the cats to live together in an impressive pride of ten!

In the weeks leading up to the face-to-face meeting, the carnivore keeping team monitored the group and observed some fantastic behaviours between the cubs and their older counterparts including lots of sniffing, touching noses through the fence and all the lions relaxing together in the same vicinity.

Monarto Safari Park Carnivore Keeper Christy Tonkin says it’s great to see all the members of the pride living so well together.

“In the wild, interactions between males and cubs can sometimes be less than friendly so it’s incredible to have the cubs and our three boys mixing so brilliantly,” says Christy.

Since their birth in February this year, the cubs have been growing up in the privacy of their own den with mum Husani. 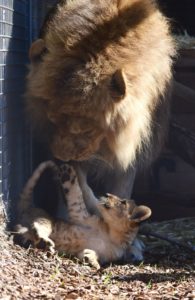 Now the cubs are stronger and more confident, keepers have been working to build safe relationships between them and the rest of the pride, with the foursome already meeting their aunties Makena and Nia in early April.

The entire pride then got together last week for the anticipated meeting in the lion night yards.

While you’d think the cubs would be scared of the males, who are seriously larger than them, it appears to be the other way around with males Kubwa, Kito and Kashka seen jumping over and running away from the cubs on several occasions.

“Male lions are often referred to as the ‘king’ of the savannah, so it was funny to see the males being so wary of the tiny cubs,” says Christy.

“The cubs’ mum, Husani, is a pretty strong lioness so it’s likely the males are avoiding doing the wrong thing by the little ones so they’re not scolded by Husani.”

While the cubs are still working out their place in the pride, the three females, three males and four cubs will all live together from now on.

Brothers Kubwa, Kito and Kashka joined the wild family at Monarto Safari Park in 2018 after making the journey from Melbourne Zoo. They were born at Werribee Open Range Zoo in 2015.

Husani, Makena and Nia were born at Monarto Safari Park in 2013 and together with the males they make up an incredibly important part of the African Lion breeding program for the region.

Sadly, lion populations are declining with only around 25,000 – 30,000 thought to be left in the wild due to habitat loss and conflict with humans.

As a conservation charity existing to save species from extinction, Zoos South Australia works closely with the Zoo and Aquarium Association (ZAA) and regional breeding programs to ensure lions remain around for generations to come.