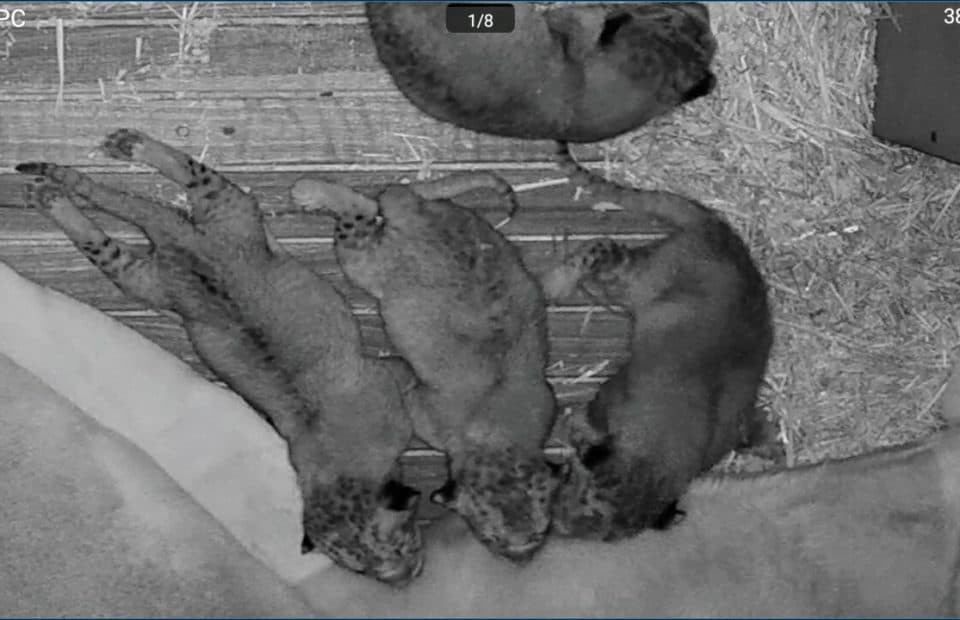 The two-day old lion cubs were born between the evening of Sunday 16 February and early on Monday 17 February to the first-time mum.

The fab four are an exciting addition to the Monarto family and are the lifeblood of new hope for the species which is currently listed as vulnerable by the IUCN.

“Husani, who is 6 years old, is doing a fantastic job and the cubs are thriving under her attentive care,” said Assistant Curator, Anna Bennett.

“It’s very exciting to see Husani with her litter. We’re so proud of how she’s taken to caring for her young.

“At this early stage we are giving the new family complete privacy, and only monitoring developments through a webcam in the den.

“We captured the births of the cubs which was amazing to see. We could also see the little cubs stumbling over each other to find their Mum’s teats.

“While we are celebrating their safe arrival it is also a time for reflection. It is heartbreaking to know that the population of lions in the wild is in decline. It is therefore imperative that breeding programs like the one at Monarto Safari Park exist – they are pivotal to securing the future of this beautiful species,” finished Anna.

The new lion cubs are yet to be sexed and will remain with Husani in an off-limits private den while the family bonds, before making their adorable debut in the near future.

Husani herself was born as part of Monarto Safari Park’s breeding program in 2013.

New additions to the lion population are very precious, even more so as African lion populations are decreasing, due to trophy hunting, habitat loss, traditional medicine and disease. There is an estimated 25,000 – 30,000 thought to be remaining in the wild.

Monarto Safari Park’s Lion 360 experience is one of the ways Zoos SA generates income to contribute to lion conservation programs such as the Zambian Carnivore Programme and the 330,000 hectare Sera Conservancy in Northern Kenya where 36 rangers protect the lions, giraffe, Elephants, and Black rhino that call Sera home from hunting and poaching.

To celebrate the arrival of our roarsome foursome, why not adopt our African lion pride today? Your support will help keep our new cubs happy and healthy. Find out more here

The gorgeous girl has recently been growing in strength and independence.

“Hope spends her day interacting with four-year old Enzi – they love to wrestle and play games of tickle. Five-month-old Zola has just started to crawl and can often be seen joining in the fun,” says Primate Keeper Hayley Lewis.

“It is such a wonderful time to come and visit the chimp troop – there is always something going on. Hope is very active and she and Enzi spend the day creating fun. Hope has a huge smile and visitors find it hard to leave,” continued Hayley.

Dr Goodall chose the one-year-old’s name to symbolise hope for future generations of endangered chimpanzees in the wild.

Keepers are celebrating Hope’s birthday with enrichment treats including paper mache balls filled with seeds and nuts, colourful streamers and a three tier cardboard cake that all the troop can enjoy.

Chimpanzees are classified as an endangered species with approximately 150,000 to 300,000 chimps remaining in the wild. Zoos SA supports chimpanzees in the wild through an international breeding program, the Tacugama Chimpanzee Sanctuary in Sierra Leone and the Jane Goodall Institute, Australia.