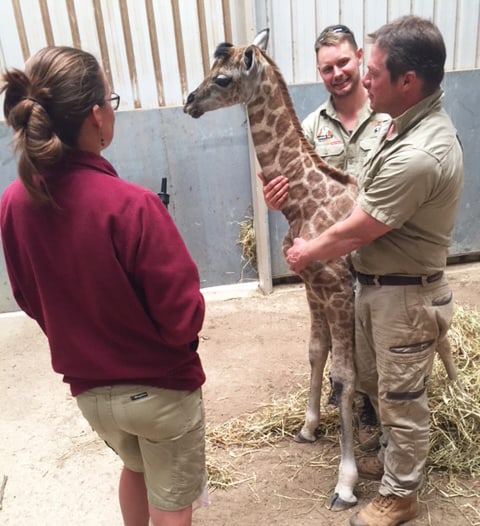 Monarto Zoo is absolutely thrilled to welcome another little giraffe to the herd – the fourth in 12 months!

Born during the night of Monday, 29 January to first-time mum, Thula, the giraffe calf started out life strong and healthy.

However, by Wednesday morning Thula had begun to display some behaviours that keepers found concerning.

‘When the young giraffe would approach Thula for milk, she would respond by kicking out and not allowing it to feed.’

Staff were then faced with the crucial decision of whether to intervene and remove the calf from the herd to hand raise it.

‘If the calf remained with the rest of the herd and was continued to be neglected by its mum, it wouldn’t have survived,’ says Mark.

After much medical and animal husbandry consultation, the decision was made to transfer the baby giraffe to a holding shed for intensive management.

Once the little giraffe arrived, her medical condition was assessed and keepers attempted to feed her impact colostrum, a supplement that mimics the nutrient-rich, immune-boosting milk produced by babies’ mothers in the initial stages of their offspring’s life.

‘Giraffe calves can be notoriously difficult when it comes to bottle feeding,’ says Mark.

‘After many unsuccessful attempts to feed the little one using different techniques, we decided to deliver the colostrum via a gastric tube to ensure she got the nutrients she needed immediately.’

The young giraffe’s condition improved quickly, and by Friday morning she was voluntarily approaching keepers and appearing to seek out food.

Keepers tried offering the little calf bottles in a range of positions and forms – even pouring milk down their faces, which she would then eagerly lick off!

‘It was a very special moment,’ says Mark.

‘Even though the amount of milk she was ingesting wasn’t huge, to finally master the correct suckling technique was an important step for her.’

After that, the calf’s appetite increased with every feed until she was able to have her feeding tube removed. 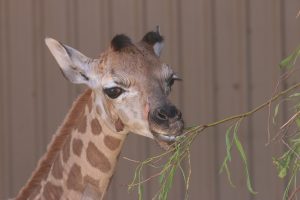 She now regularly enjoys time outside in the sunshine and is growing up fast.

‘We are all extremely happy with this calf’s progress! She’s such a big girl, though, that it’s easy to forget how young and vulnerable she still is,’ says Mark.

As a conservation charity that exists to save species from extinction, we are working to secure the future of this lofty animal through our vital breeding program, in which the newborn calf marks an important contribution.

Monarto Zoo is proud to be the most successful giraffe breeding facility in Australasia, with the not-so-little bub marking the 44th calf to be born at the zoo.

Classified as vulnerable to extinction by the International Union for the Conservation of Nature (IUCN), this species is sadly facing what experts are calling a ‘silent extinction’.

While the calf is currently still off exhibit, she’ll make her public debut once she’s ready to be reintroduced back into the herd.