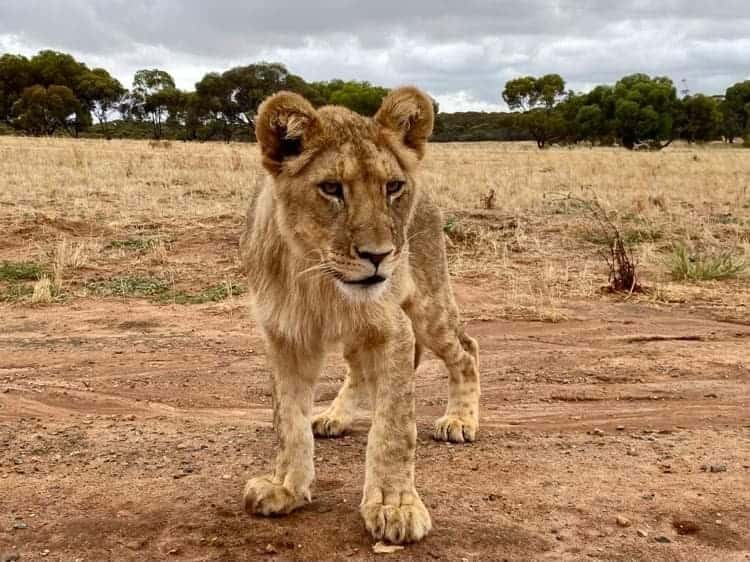 Monarto Safari Park is mourning the passing of one-year-old male African Lion cub Khari after he was humanely euthanised on Monday.

Born to mum Husani along with his three sisters in February 2020, Khari was beloved by staff, volunteers and visitors alike.

Sadly, Khari had been suffering from mobility issues which were first discovered by keepers when he was observed moving unsteadily at six months of age, though the symptoms disappeared with a few weeks.

Khari began to show mild unsteadiness again at 11 months old and was closely monitored by our keeping and veterinary teams.

As Khari’s condition wasn’t seen to be improving, vets took him to the Roseworthy Veterinary Campus for a CT scan where they discovered Khari’s cervical vertebrae was quite narrow, causing the compression of his spinal cord.

Medical management initially stabilised him, but after his condition deteriorated again Monarto Safari Park’s team decided to follow through with spinal surgery at Roseworthy to give Khari any hope of leading a normal life.

Though the procedure was not without its risks and didn’t guarantee a full recovery, the only other humane option for Khari at that stage would have been to euthanise him so the team decided to proceed with the operation.

The surgery went well but despite every effort from our vet and keeping teams, Khari’s condition started deteriorating leading to his limbs becoming paralysed by Monday afternoon.

Knowing there was nothing further that could be done, the vet team made the decision to euthanise Khari on humane grounds.

In the days following his surgery and leading up to his death, Khari was closely monitored by our vet and keeping teams with a senior veterinarian sleeping adjacent to his enclosure and checking on his recovery hourly.

Monarto Safari Park Director Peter Clark says the loss of male cub Khari will be felt keenly not just by park staff and volunteers, but by the park’s wider community of visitors and supporters.

“Along with his sisters, he was a fantastic ambassador for the plight of his cousins in the wild and will be sorely missed by many,” says Peter.

“The decision to euthanise an animal is never made lightly, but given the seriousness of Khari’s condition this was a kindest course of action for him.”

Khari is described by his keepers as a delightful cub who could usually be found hanging out with the adult males in the pride or exploring his exhibit, with a particular love of tall logs to climb.

Keepers are monitoring Khari’s mum Husani and his siblings Chikondi, Adira and Zahara but report they are doing well.

This news comes after Adelaide Zoo had to sadly euthanise 13-year-old female Sumatran Tiger Rhani on Sunday after it was discovered she was experiencing blood loss due to a number of abdominal tumours.

Both Rhani and Khari were fantastic ambassadors for their cousins in the wild, with thousands of people leaving interactions with both big cats with a stronger understanding of the threats their species face and how they can help conserve tigers and lions into the future.

Sadly less than 16,000 African Lions and just 400 Sumatran Tigers are estimated to be left in the wild.

Like lion numbers, habitat for lions has declined as human population, land cultivation and numbers of livestock have steadily increased in areas lions call home. Lions are often killed to protect livestock or as retaliation kills for livestock loss.

Similarly, Sumatran Tigers are facing similar threats with their rapidly decreasing population trend being due to habitat destruction for palm oil plantations and poaching for the illegal wildlife trade.

As a conservation charity that exists to save species from extinction, we’re deeply saddened at the loss of these two incredible animals and their personalities that taught us and our visitors so much.

We are proud to be working not only to spread awareness about African Lions and Sumatran Tigers, but to be contributing to conservation programs working to save their species on the ground in Africa and Asia.