Rockin’ around the boab tree 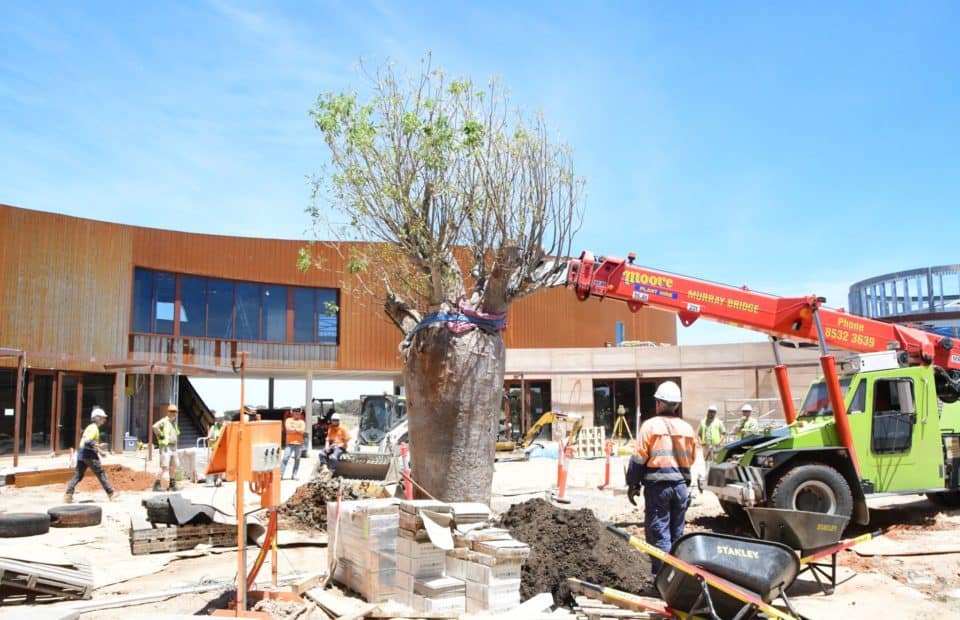 Rockin’ around the boab tree

While most would be putting up a traditional pine tree for Christmas, Monarto Safari Park has installed a very different tree just in time for the festive season.

A six-metre-tall boab tree (Adansonia gregorii) was recently planted in the heart of the new Visitor Centre creating a stunning centre piece for the park’s new headquarters.

Weighing five tonne (the weight of almost 40 baby giraffe like Kamili!) and with a circumference of over five metres, the tree is estimated to be over 100 years old.

General Manager of Operations, Jeff Lugg, said it was an exciting addition to the new development.

“The tree will continue to grow. They can live to 300 or 400 years, so this one is pretty small in comparison. It could potentially double in size,” he said.

“It has some beautiful character and gnarly bits and will be the feature and focal point of our new hub.

“When you walk in, it will just make you say ‘wow’. You can see pictures but when you actually go and put your arms around it, it is just amazing.”

The tree made the journey to Monarto from Katharine in the Northern Territory and was moved into the Visitor Centre through the entrance with a specialist crane.

“It was the ideal size and perfect opportunity because the nursery in the Northern Territory had one for us,” Jeff said.

“To harvest any native tree you need a licence so we got the approvals and then it was the case of putting it on the truck and moving it to Monarto!

“The logistics of getting a tree that size into the centre was tricky, we actually had to walk it through the new entrance with the crane. Once it was in we stood it up and filled in the hole around it.”

Similarly to the design of the new Visitor Centre, the boab tree symbolises a connection of two continents, Africa and Australia.

While this stunning tree is native to the Kimberly region of north-west Western Australia, it’s also part of the broader group of species called baobabs, which are found across Africa and the island of Madagascar.

Director of Monarto Safari Park, Peter Clark, said it was an exciting milestone for the build, which will be completed in March next year.

“The boab signals the next phase of the build,” he said.

“It is the first of the major plantings to go in and the start of the finishing touches for the Visitor Centre.

“It is very exciting for all of us to see the vision of Visitor Centre coming into fruition.”

Although it’s not confirmed how the boab species made it from Africa to its new habitat all the way across the Indian Ocean in Australia, it is known that these trees have been used by Aboriginal people for thousands of years.

Young leaves of the boab are edible and the fibrous pith of its swollen trunk and branches store moisture very successfully. This tree was also used for its medicinal properties and to make ropes, twine and boats.

The boab tree is just one of the exciting additions to the Visitor Centre in recent months. The external cladding of Corten steel and internal walls are now complete with finishing touches such as floor coverings now being installed.

The Rural City of Murray Bridge also contributed to the project through the construction of a new slip lane entry from Monarto Road.

The project also includes Monarto Safari Park’s Wild Africa development, which will include a range of wild safari experiences including open-sided vehicle tours through herds of roaming animals and a luxury hotel.

Zoos SA respect and engage with the lands many of our species are native to and understand the importance of the connection between land, people, plants and animals.

As a conservation charity that exists to connect people with nature and save species from extinction, this is at the heart of everything we do.