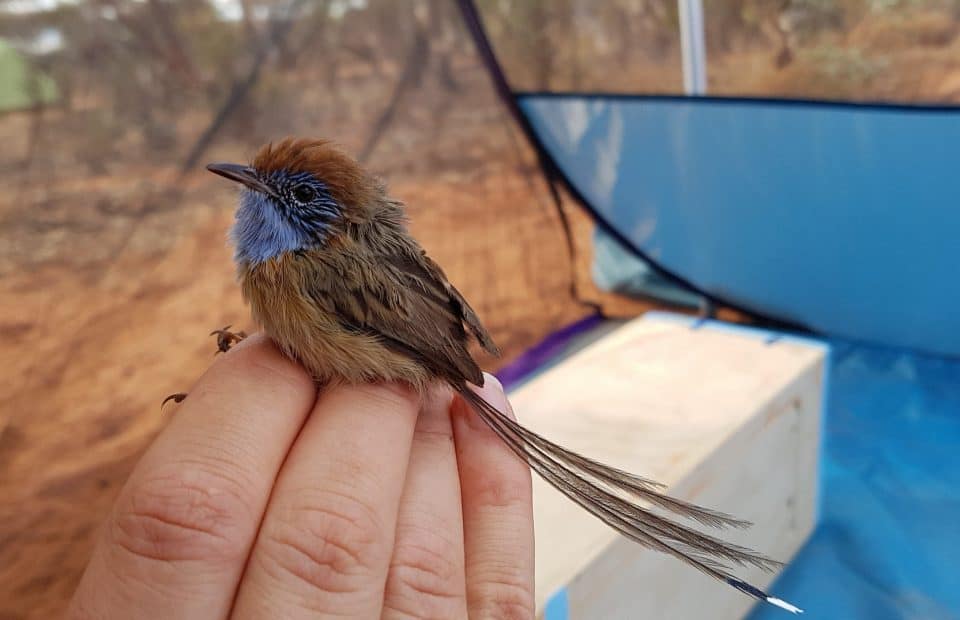 Some very special little wrens have returned home to South Australia, marking a huge contribution to the conservation program working to save their species.

Forty endangered Mallee Emu-wrens were recently released into a protected area in Ngarkat Conservation Park in the far east of the state, after being monitored and collected by a team that included Zoos SA staff members.

Zoos SA Conservation Manager Dr Liberty Olds says she worked as part of a collaboration between organisations across South Australia and Victoria to identify family groups of the tiny bird.

“We spent over 1,500 hours in the field capturing these birds in Victoria, which was just the first step in bringing these birds back to South Australia,” says Liberty.

“Because of their small size and elusive nature, capturing them was a big challenge.

“The hard work pays off though. It’s so rewarding knowing we are making progress to help these little birds.”

Mallee Emu-wren populations in South Australia were already under threat from land clearing and bush fire damage before disastrous wildfires saw them disappear from South Australia in 2014.

“After the awful events of the 2013/2014 summer, we worked incredibly quickly to create a management plan for this tiny species,” says Liberty.

“We’re really happy with the plan so far and we’ll continue to monitor the wrens and track their progress.

“Our tracking results will then be used to inform a second release in late winter of 2018, when an additional 40 birds will be translocated into the same release site.”

We are working as part of a wider Threatened Mallee Bird Conservation Action Plan Implementation Team which drives the conservation and population management of a number of threatened mallee birds.

But that’s not all.

Our specialised Mallee Emu-wren breeding facility is coming along nicely and, using the more common Rufous-crowned Emu-wren as a substitute, trials are underway to determine the necessary requirements of wrens in captivity.

We’re pleased to report our group of Rufous-crowned Emu-wrens have settled in well and chances of the breeding facility being a success are looking positive.

As a conservation charity, we’re proud to be providing a lifeline for the tiny species at Monarto Zoo and look forward to creating a brighter future for Mallee Emu-wrens.

*All images supplied by Liberty Olds and Tom Hunt