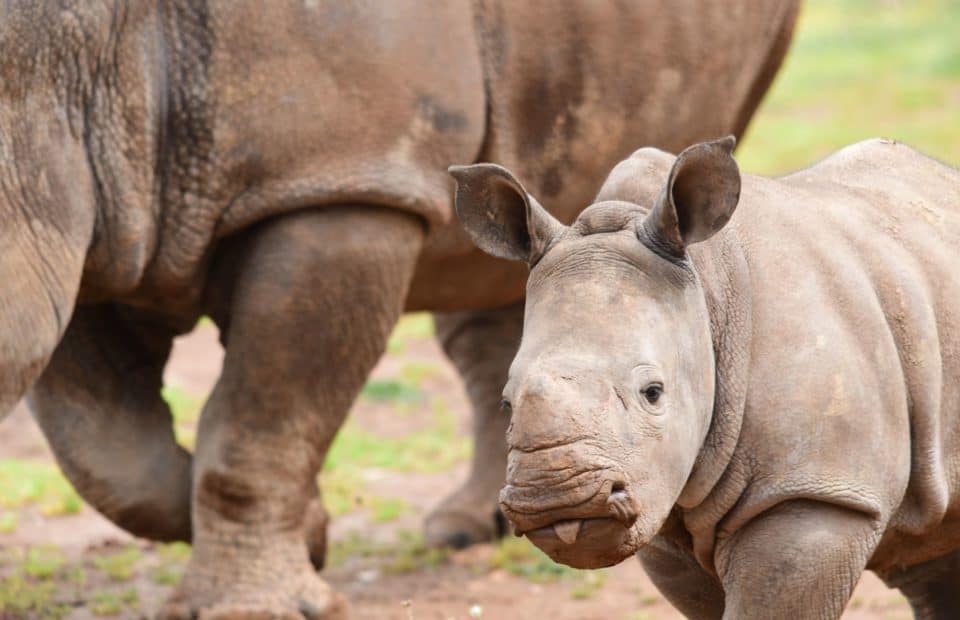 “Veterinary staff were monitoring Eshe after keepers noticed that she was not displaying her normal energy level and lying quietly for some time Thursday morning. Keepers separated Eshe and her mum Umqali from the rest of the crash to care for them. While Eshe seemed a little better on Friday she deteriorated over the course of the evening and sadly passed away beside her mum overnight.

“Mum Umqali has returned to the crash and our keepers are regularly checking her. So far, she is displaying typical grieving behaviour, calling for her calf and looking towards the area where Eshe died. She may continue to do this for a few days as she comes to terms with her loss. She continues to eat well and seeks out the companionship of the other females in the group. Our veterinary team has conducted an autopsy on Eshe and found a large trauma injury which caused extensive internal bleeding. While we are unsure how this happened, we will be developing a list of recommendations over the course of the week.

“Needless to say, her keepers and the entire team at Zoos SA are heartbroken. Eshe had won the hearts of all who had seen her. An experience to meet her had been extremely popular with many getting the opportunity to get up close to learn more about her species and the impact of poaching in the wild.

“Zoos SA plays a significant role in ensuring the survival of the Southern White Rhino, both by providing on ground protection support in Africa and by building an insurance population at the safari park. The loss of Eshe is significant and extremely sad, and whilst we feel deflated, we know we can’t stop our work. The future of rhinos is quite bleak and something we must continue to all rally behind. We must carry on,” finished Peter.

Monarto Safari Park has previously lost two other young rhino, Imani in 2019 and Tundu in 2017, both females, both at relatively similar ages and both to similar causes of death. The mother of all these calves, Umquali, has shown all the best maternal attributes being both protective and caring in their upbringing. Staff observations and previous camera footage have shown nothing negative in regard to interaction between mother and daughter or our other female rhinos. After the loss of the previous calves we made several changes regarding the management of the crash but to no avail. The coincidental nature of these deaths is difficult to ignore so we will be carrying out more testing in regards to both Eshe’s death (from the post mortem) and with both parents as well.

Additionally, on what was already a very sad day, Jasiri, an endangered African Painted Dogs pup also died while investigations were taking place on the veterinary table. Zoos SA Senior Veterinarian has advised that the death of the six-month-old was caused by advanced liver disease.

Southern White Rhinoceros roam the southern half of the African continent, in savannah and grassland habitats. The White Rhino is one of the largest land animals and has the biggest horn of all rhinos.

Surviving numbers are now thought to be less than 15,000 individuals, with experts predicting rhinos could be extinct within the next decade if poaching is not brought under control.

Zoos SA is partnering with organisations The Australian Rhino Project, Taronga Western Plains Zoo and Orana Wildlife Park to bring 30 rhinos from South Africa to Australia, with the first arrivals planned to arrive in New Zealand in 2022.

Zoos SA also works closely with conservation organisations on the ground in Africa, including The African Ranger Association, Kruger National Park Honorary Rangers and Sera Conservancy in Kenya where we help support nearly 40 rangers and their families as they fight against the illegal poaching of dozens of species.