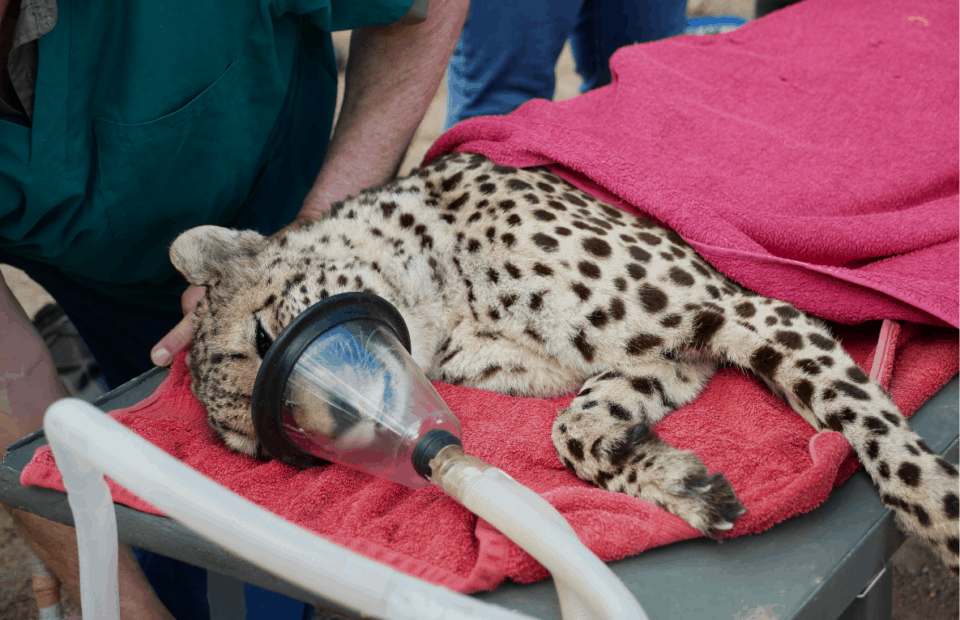 It was a busy day for the veterinary and carnivore keeper teams at Monarto Safari Park with not one but two routine carnivore health check for a hyena and a cheetah.

“Both animals underwent a general anaesthetic which allows us to more closely examine them from head to tail looking for any abnormalities. We focused upon teeth and mouth, eyes and ears, abdomen and limbs, including foot pads. We were also able to take a blood sample, which I am pleased to report showed no issues” said veterinarian Ian Smith.

“Kanzi was also given a vaccine booster.

“Then we had five-year-old female cheetah Qailee on the table. Just as with Kanzi, we checked her limbs and joints for movement and gave her a body condition score. This measurement is an indicator of health for the animal and means we can refer back to it at future health checks to demonstrate which way their health is trending.

“Qailee was also given another microchip to help identify her. Her current microchip, the one that she had upon her arrival in 2017, requires a specialty microchip reader so a zoo-standard microchip was given to simplify onsite identification,” finished Ian.

After the check-ups, which were also attended by final year veterinary students, the pair were returned to their respective exhibits where they were monitored until they fully recovered.

Kanzi, four, is a sibling of Jaali and one of nine Spotted hyenas at Monarto Safari Park. The Spotted hyena is found in their native Africa and is classified by the IUCN as of least concern. Despite their classification, their population numbers are declining due to culling, trapping and poisoning.

Zoos SA proudly partners with conservation groups like the South African National Parks Honorary Rangers to ensure the survival of species like the Spotted hyena in the wild.

Zoos SA partners with the Cheetah Conservation Fund. This conservation group is dedicated to undertaking research, habitat restoration, and human-wildlife conflict resolution. The cheetah is vulnerable in the wild, with a decreasing trend in population due to habitat loss and the exotic pet trade.

Visitors to Monarto Safari Park will be able to spot our cheetah and the Spotted hyena clan from the Zu-Loop bus and viewing platforms.

Members and visitors to Monarto Safari Park can learn about the cheetah and hyenas and Zoos SA’s efforts to help save their species through keeper talks, held daily. All visitors to Monarto Park are encouraged to book online prior to visiting our website.