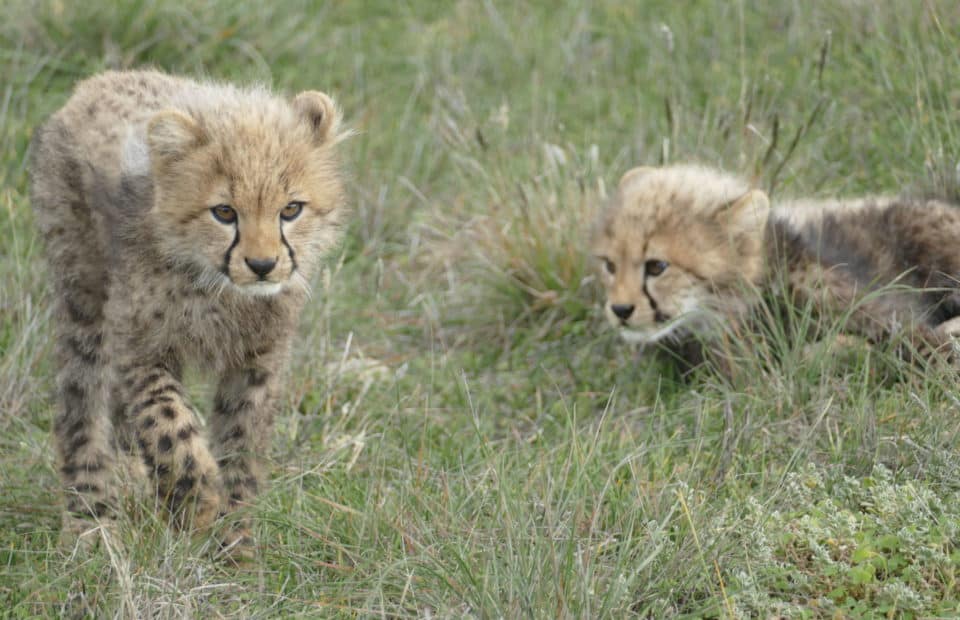 The two extra special names were chosen this week in honour of another brother and sister duo across the seas in Somalia.

In March, the cubs were two of 15 confiscated by the Somaliland Ministry of Environment and Climate Change from a man in the eastern Togdheer region, who planned to ship the Cheetah to Yemen and sell them into the illegal pet trade.

Ranging from six weeks to five months old, the Somali cubs were underweight and dehydrated. CCF veterinarians provided the cubs with around-the-clock medical care and began the slow process to increase their calorie intake to get them back to a healthy weight.

Unfortunately, many of the cubs were in such poor condition they did not respond to treatment and six of the youngest cubs died shortly after arrival.

Hani and Absame survived and were given their Somali names through a social media campaign in April. The pair are now thriving, continuing to get stronger each day and gaining weight.

Keeper Michelle Lloyd said the keepers at Monarto Safari Park wanted to honour the amazing work of the CCF through the naming of the park’s newest arrivals.

“We saw the CCF’s naming competition and thought it would be really special to name our cubs after Hani and Absame,” she said.

“It will be lovely for our cubs to have ‘sister’ cubs in Somali so our visitors can see that connection to the conservation work on the ground with organisations Zoos SA support.

“Hani and Absame will also be ambassadors for their species and highlight the challenges Cheetah face in the wild. We want to ensure these amazing animals are here well into the future.

“We hope to keep in touch with the CCF so Kesho’s cubs can grow up alongside Hani and Absame at the CCF and we can give our visitors regular updates on how they are doing.”

A spokesperson from the CCF said they were very excited to have the Monarto Cheetah named after two of the cubs in their care.

“It is a wonderful idea to have ‘sister’ cheetah cubs to talk about the illegal trade and CCF’s efforts to stop it,” they said.

“Currently, we have 90 cheetahs and one leopard who were all rescued from being smuggled out of Africa for the illegal pet trade. They need ongoing care and rehabilitation so we are always grateful for support and opportunities to educate people about Cheetah conservation.”

This week, Monarto’s Hani and Absame ventured out on exhibit for the first time with their mum, nine-year-old Kesho. They can now been seen by visitors when touring the park on the Zu-loop bus or from the Cheetah platform.

Visitors can support Hani and Absame both here and abroad, by taking part in a Cheetah experience or adopting a Cheetah at Monarto Safari Park.

Adopters will receive an extra pawsome pack including exclusive photos of the Hani and Absame at the CCF.

For more information or to book an up-close Cheetah experience, please visit www.monartosafari.com.au.