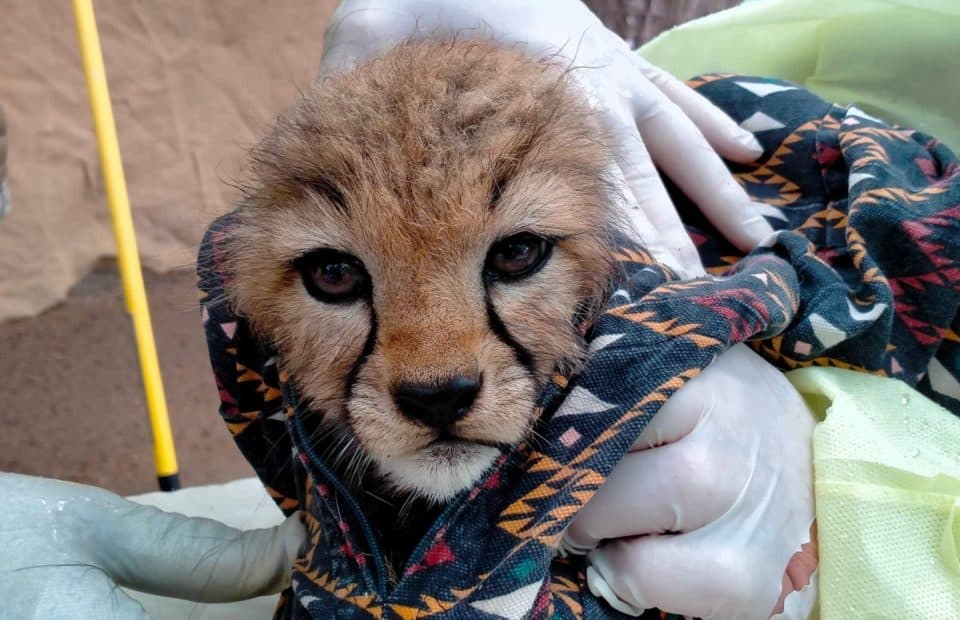 Monarto Safari Park’s playful Cheetah cubs have had their first check-up and the fluffy duo are in tip-top health!

During the health check, the park’s veterinarian team were able to sex nine-year-old Kesho’s cubs, revealing the pair are a male and a female.

The 10-week-old felines also received their vaccinations, microchips, a worming tablet, had photos taken of their unique tail markings, and had their eyesight checked.

“The cubs have been staying close to mum but they’ve been very playful and exploring outside the den,” she said.

“They are in really good health and we’re looking forward to seeing them out on exhibit soon.

“The female cub was quite feisty during her check-up so we think she’ll be one to watch!”

The cubs will venture out of onto exhibit with Kesho when they are around four months old. Cheetah cubs stay with their mother until they are around 12-18 months of age.

Female Cheetah live solitary lives, while males form a coalition for life. Usually, this would be brothers from within the same litter, however non-related males can also form a coalition, which increases hunting success and protects them from predators in the wild.

Anna explained the addition of the two cubs at Monarto Safari Park, not only gives hope to the species as a whole but encourages visitors to learn about the challenges faced by their wild cousins.

“It’s always great to be part of the regional breeding program for any species, but particularly for a species like Cheetah, which is the most-endangered big cat in Africa,” Anna said.

“The birth of the cubs not only helps the region with ambassador animals and breeding animals, but it allows more people to see and meet Cheetah and learn about their plight in Africa.”

It is estimated only 6,600 Cheetah remain in the wild in eastern and south-western Africa.

As a conservation charity, Zoos SA works closely with partners on the ground in Africa including The Cheetah Conservation Fund (CCF) to safeguard the future of amazing species like the Cheetah.

Earlier this year, the CCF rescued 15 cubs from being sold into the illegal wildlife trade in eastern Somaliland. The cubs have been recovering well, however they need ongoing care and rehabilitation.

You can help us support this spotty species, fund vital conservation projects and help the rescued CCF cubs by taking part in a Cheetah experience at Monarto Safari Park.

After a short break due to COVID regulations, this incredible experience is back. Get a glimpse behind the scenes and join these gorgeous big cats as they snack on tasty treats, interact with each other and chirp and purr to communicate.

For more information or to book your tickets to see the charismatic Cheetah, please visit www.monartosafari.com.au.