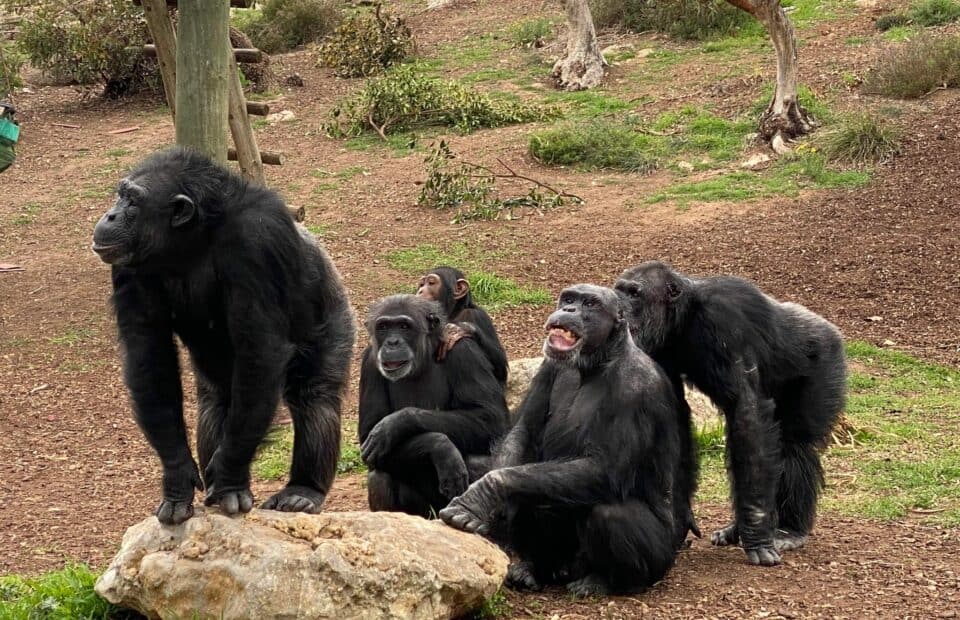 They’ve captured the hearts of animal and conservation lovers around the globe… now everyone’s good wishes have paid off with Monarto Safari Park’s Chimpanzee troop fit to receive visitors from Friday and, as if that wasn’t good news enough, there’s more Chimpanzee cheer to share.

After being diagnosed with Respiratory syncytial virus (RSV) on Friday 15 July, the 12 chimps, ranging in age from 43 to two-years-old, were in quarantine while under the careful watch of veterinarians and their keepers. Cups of homemade soup, hot lemon and honey tea and regular doses of paracetamol have helped the chimps go from drowsy with runny noses and coughs, to bright and active.

“We are delighted to say that the Chimpanzees have recovered and we feel it is safe to reopen the chimp platform from tomorrow,” said Peter Clark, Director of Monarto Safari Park.

“On top of the Chimpanzee’s recovery, we have some very special news. We are excited to announce that 28-year-old Hannah is pregnant!

“We were planning to announce news about Hannah’s baby bump on World Chimpanzee Day (14 July), but when the chimps took ill we decided to wait.

“The last few weeks were worrying as Tsotsi was really quite poorly, while the others had varying degrees of illness. However, they have now all made a great recovery thanks in part to their resilience but also due to the wonderful TLC they received from keepers and the vet team.

“We are in the conservation business and so of course we care deeply about the species at our sites. It’s been so wonderful to know that people around the world have been wishing the Chimpanzees well. We have had many get well messages from our members and locals but also from as far afield as the UK, USA and Canada. We are grateful for the well wishes – it proves how much people love the chimps.

“This will be Hannah’s second baby. Her first born, Hope, is now three-years-old and is an absolute delight. Visitors often see the two playing together and we have no doubt that Hannah will be as wonderful a mum to her newborn, which is expected in November,” finished Peter.

The Chimpanzee troop at Monarto Safari Park are ambassadors for their wild cousins. Listed by the IUCN as being endangered to extinction, Chimpanzees are subjected to poaching, habitat loss, and diseases such as Ebola virus disease (EVD) leaving as few as 170,000 left in existence.

Zoos SA also collects old mobile phones for recycling to reduce the need to mine and the manufacturing carbon footprint. All phones donated to the They’re Calling on You campaign will generate funds for the on-ground work with Tacugama Chimpanzee Sanctuary and the Jane Goodall Institute Australia.