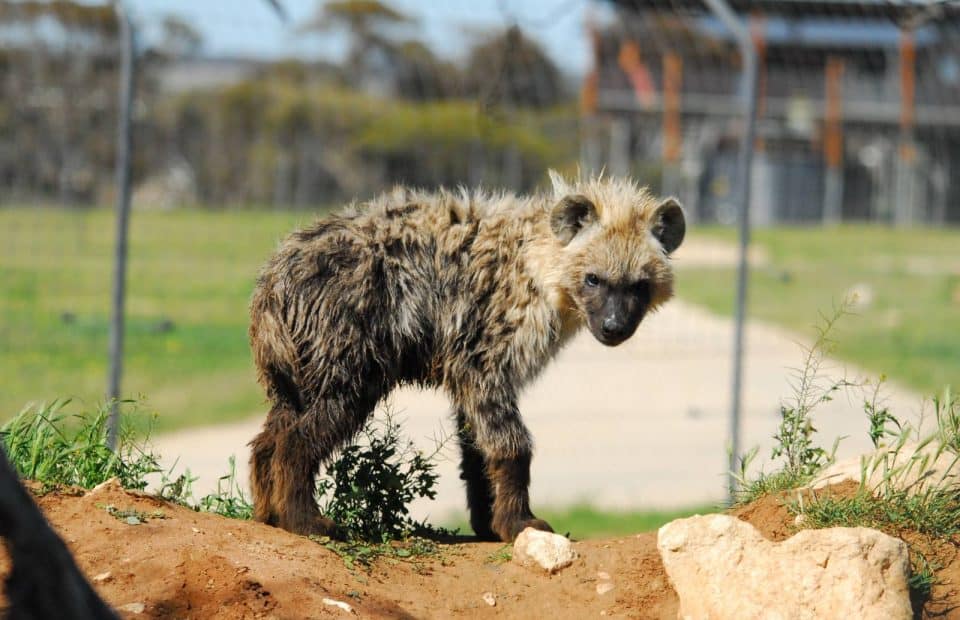 The Spotted Hyaena is a super special animal that unfortunately often gets a bad rap! To help change that perception, our dedicated and passionate carnivore keepers have put together a list of some cool facts you might not know about them.

Read on and we guarantee you’ll fall in love with this super interesting species!

1. Spotted hyaenas are a social bunch

They live in large groups made up of up to 90-120 individuals! These are known as clans, and are often made up of smaller family groups which break away and come back together over the seasons.

2. Females are in charge

Females are the dominant sex in a group of hyaena and the leader of the clan is known as the matriarch. Male spotted hyaena are ranked lower than the lowest female of the group. Females are normally 10 per cent larger than a male, girls weigh about 65-70kg whereas the boys reach 50-55kg.

Little hyaena cubs are born fully black or chocolate brown with a full set of teeth and open eyes. Spots and markings start to develop over time, and the little ones can emerge from the den as young as a few days old.

Their bite force is stronger than a lion or tiger! In fact, they can break open the leg bones of giraffe and hippo, even bones that are three inches in diameter.

5. They are hunters, not scavengers

Hyaenas might be portrayed as scavengers, but in fact they are very successful hunters and get up to 75 per cent of their food from their own kills.

6. That giggle they’re famous for? It’s not really a laugh

The infamous hyaena laugh is a noise they make when they’re nervous. Usually, it’s the lower ranking animals making it during feeding time or when there’s a fight.

They share a similar level of intelligent to primates! They are fabulous thinkers, problem-solvers and are incredibly inquisitive.

Females have the same genitalia as males, referred to as a pseudo penis. They even urinate and give birth through this canal!

9. A hyaena is not related to a cat or dog

You might think hyaenas share some similar-looking traits to dogs, but they are most closely related to the Mongoose family!

10. There are 4 Hyaena species

Spotted hyaena, striped hyaena and brown hyaena as well as the smaller, slender, hole digging aardwolf which eat termites. They all live in Africa, but the Striped Hyena also ranges through Arabia and India into the Himalayas.