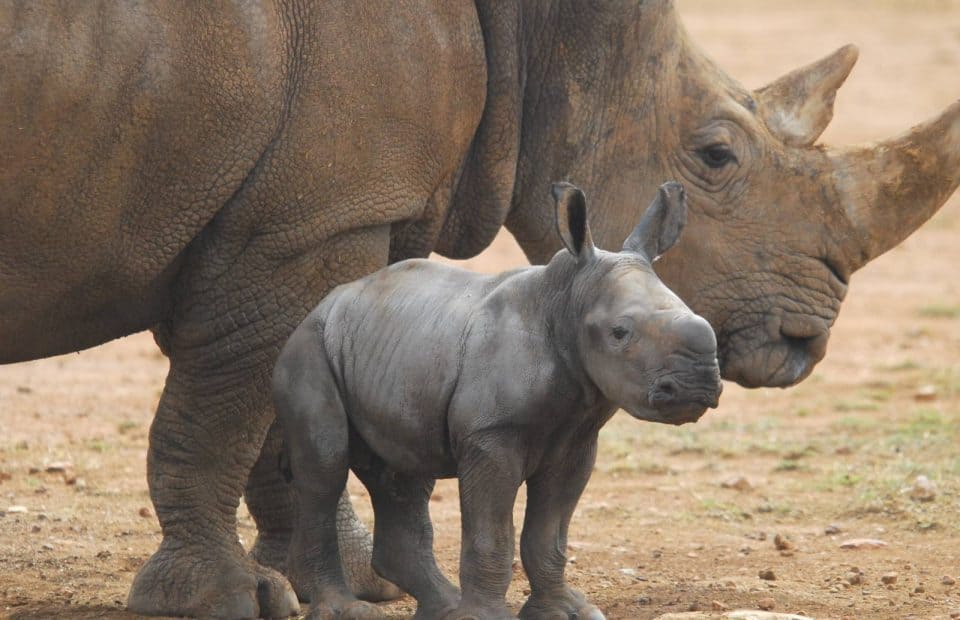 The highly anticipated wait is over – Monarto Zoo has welcomed an incredibly cute newborn rhino calf!

This adorable new addition was made known to keepers on Monday morning after being born to mother Umqali overnight.

The young calf, named Imani, spent the first few hours of life busy capturing the hearts of our ecstatic keepers and was soon identified as a little girl.

Monarto Zoo Ungulate Keeper Haidee Kinter said the team had been preparing for the exciting arrival of the not-so-little calf for a few weeks.

“Umqali had been showing hormonal signs that she was getting close to giving birth, so we had been eagerly keeping an eye on her,” Haidee said.

“Towards the end of her pregnancy we were lucky enough to see some calf movement in her belly which was incredibly special.

“Now that the calf has arrived we are very pleased that Umqali is being a fantastic mother and the pair are doing well and appear very relaxed.”

Imani is the sixth calf born at Monarto Zoo, and the mother and daughter duo are currently out on exhibit along with Uhura and Savannah, where visitors can see them on the Zu-loop bus.

Monarto Zoo Director Peter Clark said the newborn calf was an excellent achievement for Monarto Zoo and the international breeding program working to save the endangered species.

“We are absolutely thrilled to welcome this beautiful young calf to Monarto Zoo and pleased that her arrival is contributing to the insurance population of such a remarkable species,” Peter said.

“Sadly, with the poaching rate now exceeding the birth rate of rhinos in Africa, it’s heartbreaking that rhinos are facing some serious trouble in the wild, experts predict that if we don’t act now, they may be extinct in less than 10 years.”

Zoos SA is working with The Australian Rhino Project and other partners to bring a rhino sanctuary to life at Monarto Zoo.

This critical project will see a large number of Southern White Rhinos relocated to safety in Australia in the next few years.

“This sanctuary will create a viable rhino insurance population outside of Africa should the species become extinct,” Peter said.

“Every day we’re working hard to bring this ambitious project to life, but as the process of relocated rhinos is complex it will take time. As a conservation charity, the help of our passionate supporters goes a long way in continuing this important work.

“We hope South Australians far and wide will visit Monarto Zoo to welcome our newest addition, and in doing so they will be helping to support Zoos SA with this critical project.”

Visitors are able to support the Rhino Quarantine and Management Centre simply by visiting Monarto Zoo, donating to the project or by purchasing tickets to Zoos SA’s Rhino Gala.

Imani was christened by rhino supporters Rachel Maddern and husband Matthew Murton after they purchased the right to name the baby at a previous Zoos SA Rhino Gala.

Imani means ‘faith’ in Swahili, and was chosen in honour of Rachel’s grandfather, long serving volunteer Anthony Taylor; a man who had an unwavering faith in people and always saw the best in situations.