Monarto Safari Park is open under a SA Health Covid Management Plan. You must book a ticket prior to your visit, wear a face mask at all times, and follow our entry restrictions. Read more here. 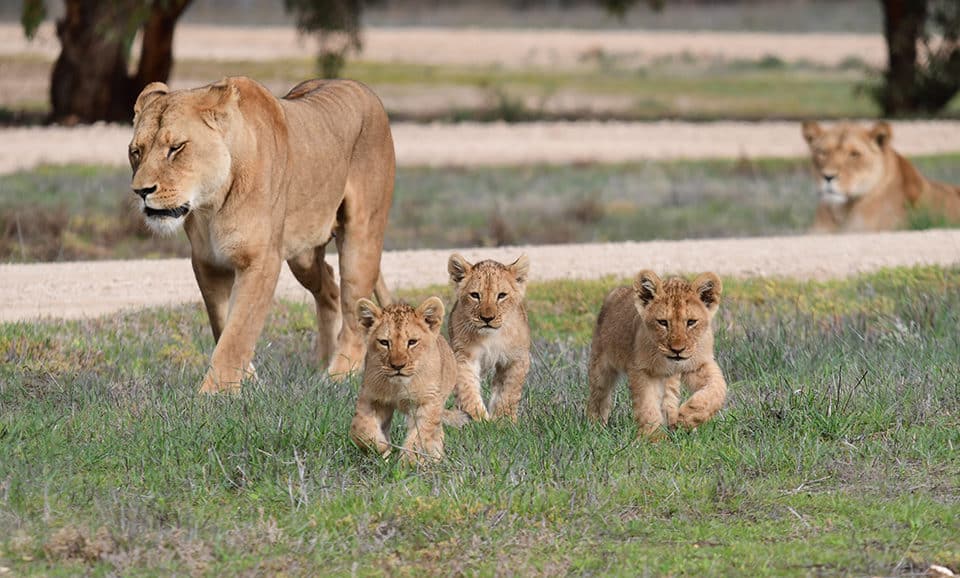 Monarto Safari Park’s four playful and pouncing lion cubs now have names after a competition to name them received more than 1,000 votes and nominations.

The public were asked to vote for their favourite name for the three females from a list of six names. The winning names were: Chikondi meaning love, Adira meaning majestic and Zahara meaning flower. Working closely with the lions means that keepers were able to match these names with the lions’ personalities, behaviours and looks.

“Adira is the larger female and more confident so ‘majestic’ fits her well.

“And Chikondi, well, she had a sore leg for a while and had to have regular medicine and got that extra bit of TLC so a name meaning ‘love’ seems very fitting,” finished Rachel.

The public were then asked to come up with an African-inspired name for the one male cub. The winning name, Khari, was suggested by a number of entrants. Khari means ‘King like’ which is fitting for a future leader of a pride.

All four cubs are doing well and are growing very quickly. They love playing with the adults in the pride of ten. They also enjoy climbing trees and jumping on each other.

While other ‘experiences’ will be unavailable due to current health restrictions, Lions 360 will operate when Monarto Safari Park reopens on Monday 29 June at a reduced limit of 20 people.

Although seeing the lion cubs from the Lions 360 dome isn’t guaranteed, they do have the taste for meat and regularly approach. The lion cubs can also be seen from the bus and from the viewing platform.

Monarto Safari Park reopens to the public on Monday 29 June with restricted numbers. Online bookings are recommended and visitors and members are asked to go to www.monartosafari.com.au/tickets/

Zoos SA would like to extend its thanks to all who entered. Winners received family passes to Lions 360 and have been notified.