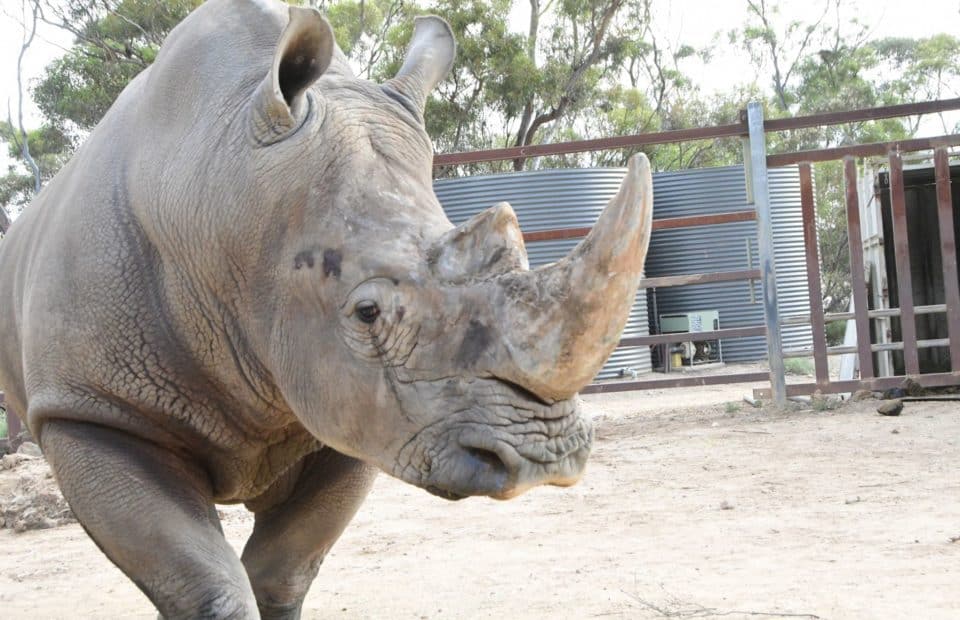 Zoos SA and Taronga Western Plains Zoo have joined together to help ensure the survival of one of the world’s most spectacular species – the Southern White Rhinoceros.

Moving two 2000kg rhinos is no mean feat – with the 13-hour road trip expertly undertaken by a team of keepers and staff from both sites.

These ravishing rhino boys have actually met before, as two of seven rhinos that arrived in Australia from Kruger National Park in South Africa in 2002.

The importation of wild-born rhinos was an important addition to the national population as it injected new genetics into the region.

“I was here when Satara first arrived at Monarto Safari Park and then was here to load him on the trailer for the next part of his journey in Dubbo,” he said.

“It’s great to now have Umfana here to broaden the gene pool and play an important part in our breeding program of this endangered species.

“He has settled in really well and is now out in his new habitat and is very happy and healthy.”

Both bulls travelled very well throughout their respective journeys in purpose-built crates, thanks to months of careful planning and preparations.

“On the day of his departure he went into the crate really smoothly and travelled very well throughout. Our Senior Veterinarian accompanied him and returned with Satara, who was unloaded here in Dubbo in the early hours of last Wednesday.”

Visitors can now see Umfana near the White Rhino Boma at Monarto Safari Park and keepers will soon introduce him to the female crash; Uhura, Umqali and Savannah.

Southern White Rhinoceros roam the southern half of the African continent in savannah and grassland habitats. They are one of the largest land animals and have the biggest horn of all rhino species!

Southern White Rhinoceros are classified as endangered with around 10,000 remaining in the wild. One of the biggest threats to the population is poaching for the international rhino horn trade, which commands a high value on the black market.

By purchasing a ticket to Monarto Safari Park or getting up close during a rhino experience, you help Zoos SA fight to ensure these powerful giants stay a stampede ahead of extinction.

Please note due to the impact of COVID close contact restrictions on staff and volunteers, Monarto Safari Park has capped numbers over this weekend. To avoid disappointment, we encourage all visitors to book their tickets in advance at www.monartosafari.com.au/tickets/.