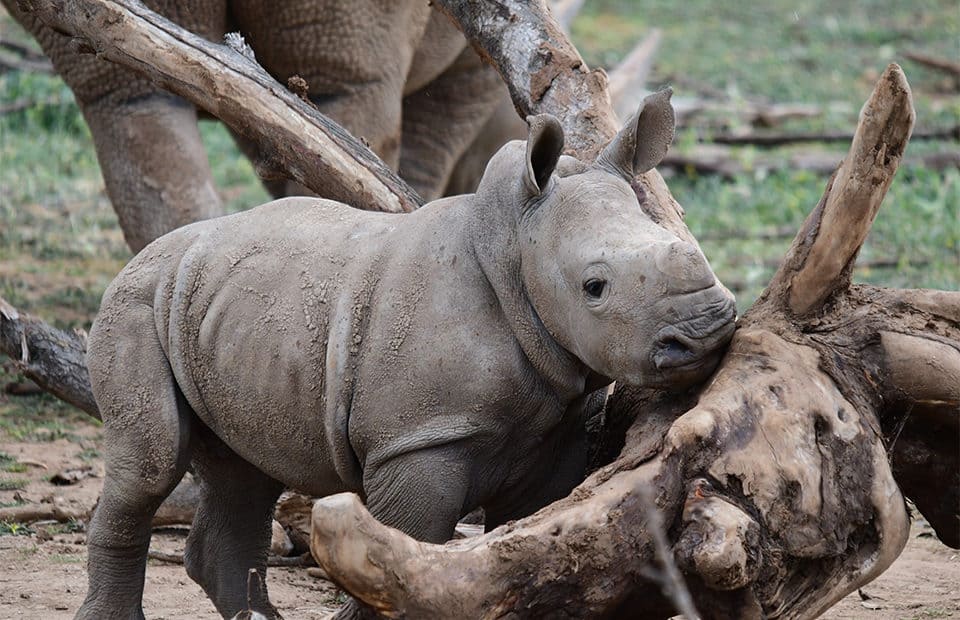 Eshe is a variant of the Swahili girl’s name Asha, meaning, amongst others, life and energy.

“Her name is fitting as she has brought new life to this threatened species and it’s fair to say that Eshe is a huge energy ball – she’s often seen thundering around her paddock and keeping mum Umqali on her hooves.

“We asked Beach Energy, sponsors of the threatened Southern White Rhino at Monarto Safari Park, to come up with some suggestions and their staff presented us with a fantastic list of names.

“There were so many beautiful names to choose from, all with a nod to the Southern White Rhino’s native Africa and to hope for this threatened species’ future.

“Our keepers then whittled down the names down to a shortlist of three before Zoos SA staff and volunteers got the final vote.

“Eshe, exactly two months old on World Rhino Day, is a significant addition to her species which is threatened with extinction,” finished Elaine.

“The birth of this new Rhino calf and her vibrant personality has brought a lot of joy to people in what has otherwise been a very challenging year for everyone.

“Our staff were honoured to be part of naming the new rhino – and came up with some very creative and interesting names.

“We encourage everyone to come to Monarto Safari Park and meet the new Rhino calf, and support what is a very worthy cause,” finished Rob.

Little Eshe will play her part in helping to ensure the survival of Southern White Rhinos by boosting the numbers of animals held safely in Australia and New Zealand.

Zoos SA is working with The Australian Rhino Project and other partners to bring a rhino sanctuary to life at Monarto Safari Park. The project will see more Southern White Rhinos relocated from Africa to Monarto Safari Park in 2022.

It is hoped that Monarto Safari Park will eventually become a sanctuary for up to 40 rhino, who will live in the large Wild Africa safari experience area currently being developed.

The International Union for Conservation of Nature (IUCN) reports there are approximately 10,000 mature Southern White Rhinoceros in the wild and that the population continues to decrease. Poaching for its horn, incorrectly thought to have medicinal properties, is the rhinos’ biggest threat.

Visitors will get to see little Eshe from the Zu-loop bus. She will most likely be charging around the paddocks with females Umqali, Uhura and Savannah not too far behind. All members and visitors are requested to book their tickets online at www.monartosafari.com.au/tickets.