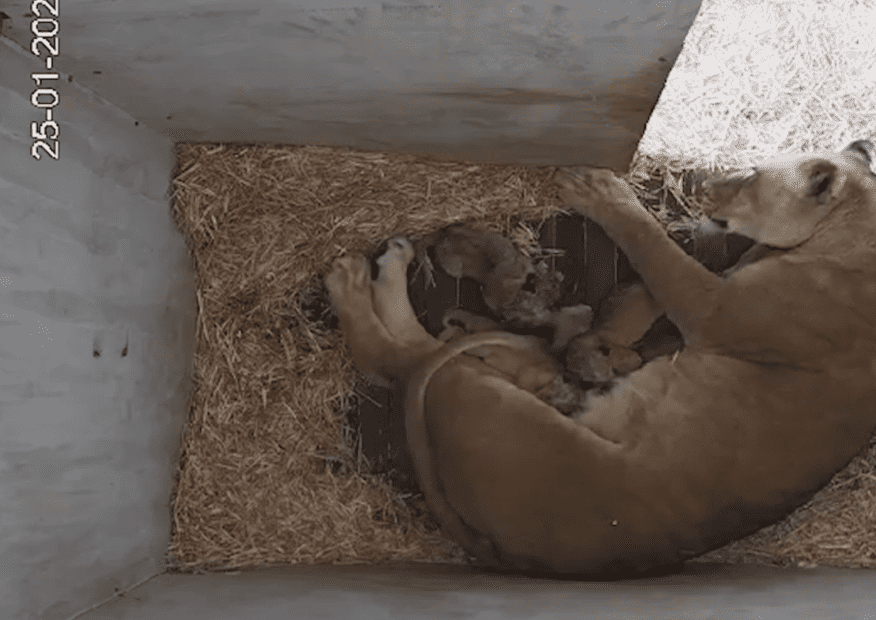 “We were quite surprised with five cubs, we actually thought she looked smaller than last time,” she said.

“It’s been very exciting and Husani has done really well. As a second time mum, she’s done it before so that was really encouraging.

“She has been very attentive, licking and cleaning them and all five cubs have been moving around and we’ve seen them feeding and waddling around looking for mum’s teat.

“Every birth at Monarto Safari Park is such a special event for us because our breeding programs are vital in raising awareness and securing the future of vulnerable species like African Lions.”

Keepers were able to watch the births via a cub cam in Husani’s den. This ensures the new family has privacy and time to bond, while keepers can monitor and keep a close eye on any movement.

A particularly warm and fuzzy moment came when the first born cub, clutched onto Husani’s tail as it received a cuddle and a lick from mum.

The new arrivals will remain in an off-limits area for the first few months of life. At around four weeks old, the cubs will be introduced to their aunties and their half-sisters, Chikondi, Adira and Zaha, who were Husani’s first litter born in February 2020.

“The older girls have seen cubs before but it will be the first time for Husani’s previous cubs, so it will all be new to them,” Anna said.

“I’m sure there will be a lot of excitement and wanting to play.”

At six weeks the cubs will receive their first health check, where keepers will be able to determine their sex.

Once ready to venture out beyond the den, the little ones will make their debut in the lion exhibit. Until then, Zoos SA will be providing regular updates and footage for the public to watch the cubs grow here.

The adorable additions are the next generation of Monarto Safari Park’s breeding program, with Husani herself born at the park in 2013.

The birth of any animal is a precious gift, particularly at Zoos SA where so many of our species are threatened with extinction.

For Husani and her lion cubs, their life at Monarto Safari Park looks bright and sees them free roaming in hectares of plains – safe and sound with the rest of the pride. In their native Africa, however, lions face a very different future.

There, this majestic species is vulnerable to extinction, their population decreasing due to indiscriminate killing, habitat loss and trophy hunting.

The IUCN Red List of Threatened Species estimates that there are only 23,000 – 39,000 remaining in the wild.

Zoos SA followers are encouraged to ‘take pride in helping the Pride’ by supporting the lion cubs through adoption.

Additional to the funds Zoos SA makes through visits, roarsome experiences such as Lions 360 and donations, lion adoption supports rangers patrolling the Sera Conservancy in Kenya and the partnership with the Painted Dog Conservation Inc supporting the Zambian Carnivore Program.

Adopters will receive an exclusive photograph of the newborn cubs taken in their den, and lion fact sheet.

Our breeding and conservation work also wouldn’t be possible without the amazing support of wonderful corporate partners like ElectraNet.

Zoos SA looks forward to sharing more updates on Husani, her cubs and the plight of their wild cousins in the months to come.

For more information or to book your tickets, please visit www.monartosafari.com.au.