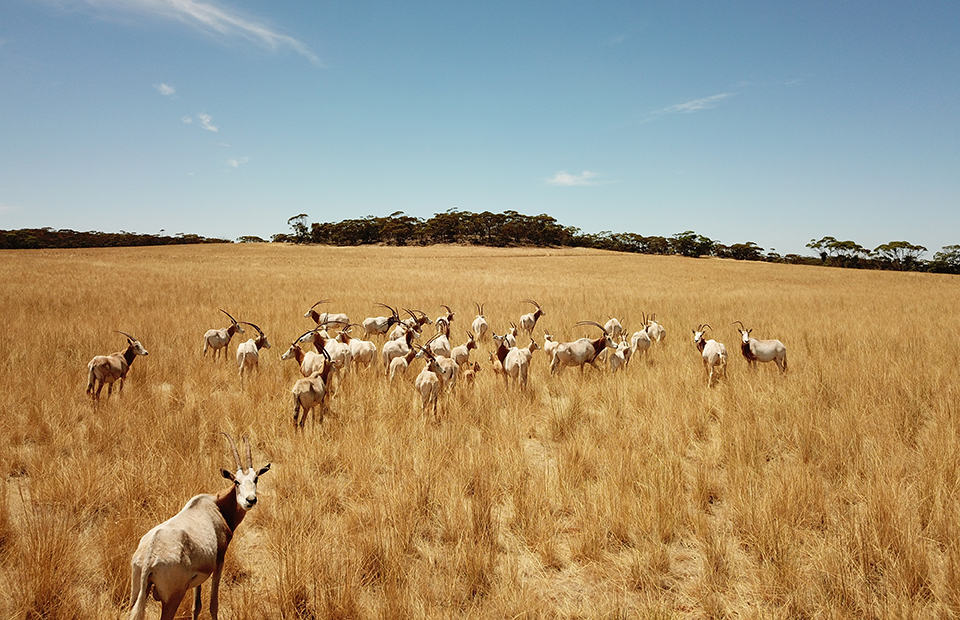 Dozens of extinct-in-the-wild animals set foot, or should we say hoof, into their new home in a major milestone for Monarto Safari Park’s new 550-hectare precinct, Wild Africa.

A total of 38 Scimitar-horned Oryx were released into stage one of the park’s $40m safari and accommodation expansion.

The expansion will boast a range of new safari experiences as well as a luxury resort thanks to funding from Australian businessman and private investor Gerry Ryan OAM.

Scimitar-horned Oryx are a striking antelope species from North Africa, characterised by their large, curved horns that resemble a scimitar sword.

Monarto Safari Park’s Director Peter Clark says the release of 38 oryx individuals is not only special because it’s a first for the park, but even more so because, sadly, large herds of this species don’t exist in the wild.

“The Scimitar-horned Oryx is listed as extinct in the wild by the International Union for the Conservation of Nature, and has been for many years,” says Peter.

“To see these animals roaming in grasslands as they would in the wild is a magnificent sight and stark reminder of how vital conservation work is, not just for the oryx, but for species all over the world.”

This first stage of the Wild Africa development, known as “Etosha” after Etosha National Park in Namibia, now houses the 38 oryx along with 14 Blackbuck, and three Ostriches.

Down the track, the area will also house other free-ranging species like Giraffe, Waterbuck, Bongo, Nyala, Eland, Zebra, Hippos and Southern White Rhino.

Monarto’s Wild Africa vision is no small project – over 550 hectares (1,400 acres) have been planted with specific grasses to not only provide food for the huge number of animals who will call the area home, but also to create scenes reminiscent of the African Plains.

More than 40kms of rhino-proof fencing is being installed and a further 20kms of external feral-proof fencing will keep out pests like feral cats and foxes.

Construction on the park’s new precinct began a few years ago and is now stampeding towards completion with the recent construction of eight waterholes and 20kms of safari tracks.

Volunteers have been involved in many areas of Wild Africa’s development, assisting with anything from planting to painting to help create the feeling that visitors are truly immersed in the African wilderness.

Future visitors to the Wild Africa precinct will help fund Monarto Safari Park’s vital conservation work, both here in Australia and around the world.

As a conservation charity that exists to save species from extinction, we’re proud to support a number of international conservation partners.

We’re proudly part of Conservation Centres for Species Survival (C2S2), a group that includes an array of larger-sized zoos and other conservation-based organisations from the USA and around the world, all dedicated to breeding endangered animals with the hope of eventually seeing them released back into the wild.

C2S2 works with many of the same species that Wild Africa houses and will house in the future, including the Scimitar-horned Oryx.

The species’ decline in numbers can be attributed to uncontrolled hunting, excessive drought, agricultural encroachment and excessive grazing of the limited vegetation by domestic livestock.

Efforts in recent years have centred on the release of Scimitar-horned Oryx back into the wild in North Africa, specifically into Chad, and so far re-establishment results have been very encouraging.

Visitors will be able to experience a Wild Africa safari at the park as early as 2022, with construction of the accommodation and resort planned to begin mid this year.

People wanting to visit Monarto Safari Park are strongly encouraged to book their tickets online in advance via our website.