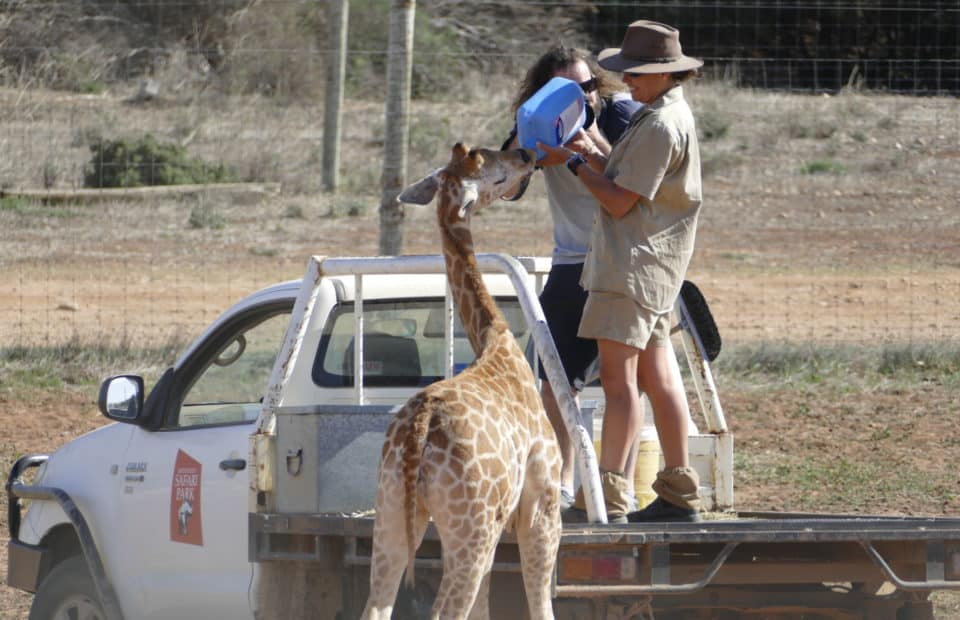 When giraffe Thula gave birth to her second calf in October last year, keepers kept their fingers crossed that things would go well. However, despite a good birth, the 14-year-old mother began to show the same reaction to her new calf as she did to her previous calf, Eyelean…

“We monitored Thula and her calf carefully to make sure that they were bonding and feeding, however, it soon became clear that Thula was ignoring her calf and refusing to let her feed,” said keeper Haidee Kinter. “That’s when we decided to intervene.”

“Hand-raising any animal is difficult, then factor in a timid and flighty giraffe and it’s even more so.

“It takes a while for some animals to understand that you are trying to help and to trust us keepers.

“On top of these issues, little Nolean also became very sick. At one point, just around Christmas, we were unsure if Nolean would survive. There were times when we thought she wouldn’t last. She was incredibly weak and so we maintained a roster with a keeper or member of our veterinary team staying by her side 24/7.

“Being ill didn’t help with her wanting to take her milk. Some days she would take some milk and then other days she just wasn’t interested.

“However, there is light at the end of the tunnel. At just over four-months-old we are just beginning to see signs that she’s feeling better and is taking her milk more regularly.

“She’s growing and getting taller which are great signs. She’s also enjoying sharing her off-limits space with two other giraffe, Asali and Scarlett, with Asali stepping in as an ‘aunty’ figure and taking good care of Nolean.

“We hope to let Nolean run with the rest of the herd soon, but not before we are sure she is taking on enough milk,” finished Haidee.

As a conservation charity the cost of hand-raising a giraffe is significant, especially when you factor in the milk, supplements, the additional staffing hours required and Nolean’s veterinary care.

Nolean is now drinking 4.5l per feed at two feeds per day. The cost of this milk is $300 per 20kg with each bag lasting approximately two weeks. Additionally, she is also given Impact, a Colostrum supplement plus pre and pro biotics – essential to boost her health after her serious bout of illness.

Eyelean, Nolean’s sister, so called after she was injured by her mother and received a swollen eye and wonky neck in the process, was also hand-raised but took to being hand-fed immediately and was even happy to follow her keepers around. Eyelean moved to the newly opened Sydney Zoo in December 2019 where she has proved herself to be a great ambassador for her species.

Monarto Safari Park has one of the most successful giraffe breeding programs in Australasia. However, the population of giraffes in Africa has not fared so well. The number of wild giraffe has declined by 36-40% over the last few decades with an estimated 68,293 mature individuals remaining.

As well as building up its insurance population of giraffe at Monarto Safari Park, ZoosSA supports many international conservation programs including the Giraffe Conservation Foundation (GCF).

The decreasing giraffe population in Africa is referred to by experts as a ‘silent extinction’. Although we are often shown images of giraffe in Africa there are now less giraffe than there are elephants and, despite their grand stature, these gentle giants are disappearing right in front of our eyes.

A visit to Zoos SA Monarto Safari Park is just one way that people can take action and help to save giraffes like little Nolean and her wild cousins in Africa from extinction. Another is to adopt Nolean or, make a donation through the Zoos SA page: https://www.zoossa.com.au/animal-adoption/