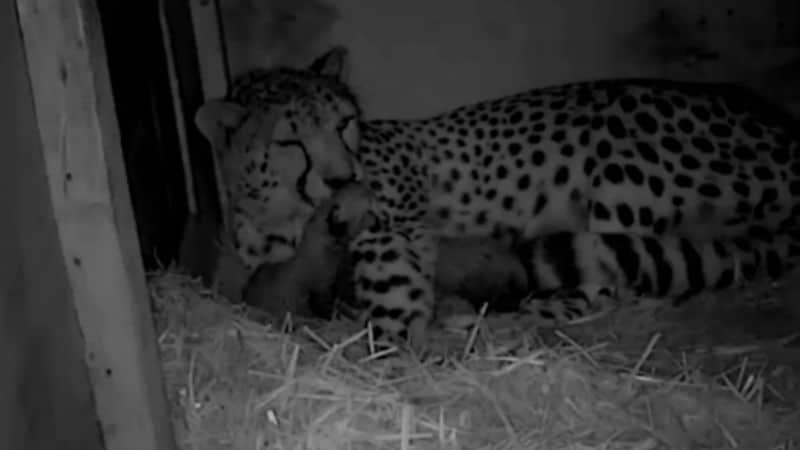 The healthy cubs – born Monday 21 May – are an exciting addition to the zoo family and Kesho’s second litter in two years.

Carnivore keeper Jon Allon said mother Kesho was doing very well and the cubs were thriving under her attentive care.

“It’s very exciting to see Kesho with her second litter, we’re so proud of how she’s taken to caring for her young,” Jon said.

“At this early stage we are giving the new family complete privacy and only monitoring developments through a security camera in the den.”

Classified as vulnerable to extinction in the wild, the cheetah cubs mark an important contribution to the breeding program working to secure the future of the species.

The cheetah is the world’s fastest animal, but also Africa’s most endangers big cat with just 6,700 estimated remaining in the wild of eastern and south-western Africa.

“It is heartbreaking to see the numbers of wild cheetah population decline, it’s mainly due to habitat loss and the killing and capturing of cheetah to protect livestock against predation,” Jon said.

“Breeding programs like ours are pivotal in securing the future of this beautiful species.

“These cubs were sired by Saadani, a different male to Kesho’s last litter, which is hugely beneficial for the global cheetah population.”

The cubs are yet to be sexed and will remain with Kesho in an off-limits private den while the family bonds, before making their public debut in the near future.

Kesho was born as part of Monarto Zoo’s breeding program in 2012, while Saadani arrived at the zoo in 2014.

Monarto Zoo has shown off its latest additions to the family – four adorable cheetah cubs!Mother Kesho gave birth to the litter last week, with keepers saying the family are all doing well.More details TONIGHT in 9 News Adelaide at 4.00pm and 6.00pm.#9News | http://9News.com.au