Monarto Safari Park is open under a SA Health Covid Management Plan. Please book a ticket prior to visiting, and click here to read our vaccination, face mask and travel requirements. 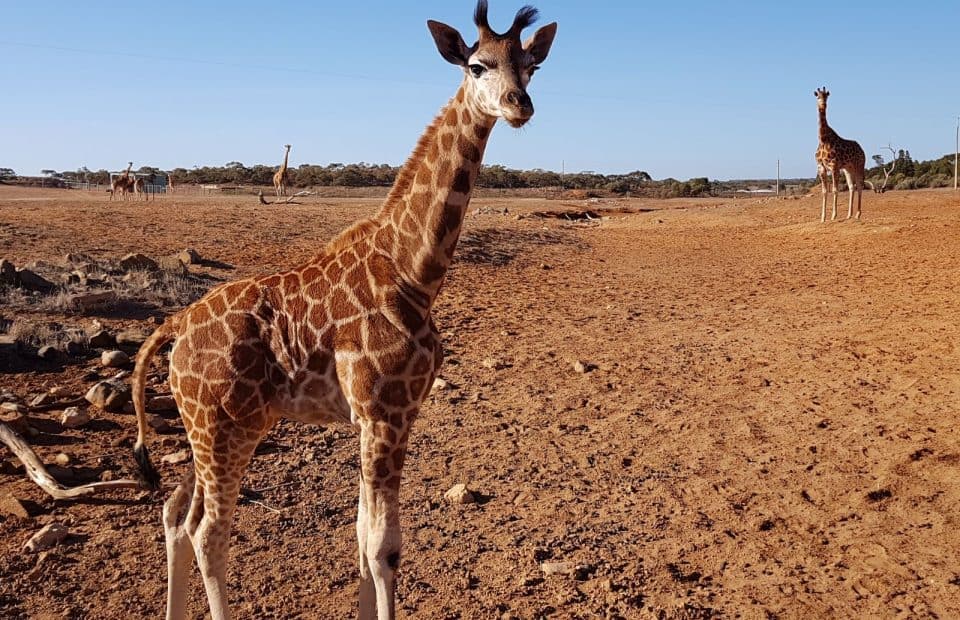 Eyelean had a tougher start to life than most. Having been rejected by her first-time mother, keepers made the decision to hand-raise the not-so-little newborn.

Now a year later, we are incredibly proud of how she’s grown and successfully hit important milestones along the way.

Monarto Zoo Keeper Tess Stevens said successfully hand raising Eyelean and re-introducing her to the herd had been an incredibly challenging but rewarding venture.

“Hand raising a giraffe isn’t a very common practice as it can be very labour intensive, but we couldn’t be more pleased with how Eyelean has grown and developed,” Tess said.

“It was all-hands on deck during the first few months of her life as we acted as a surrogate mum while she grew healthy and strong.

“Now, we couldn’t be more excited to celebrate her first birthday and treat her to a delicious cake!”

At three-months old, keepers prepared Eyelean for her integration into the Waterhole habitat with the herd by teaching her to bottle feed and eat browse from the back of their utes.

“During that time she enjoyed regular contact with the herd through a fence and she loved getting her face and horn tufts licked by another female giraffe, Asali,” Tess said.

“In fact, since Eyelean joined the herd Asali took on a bit of a big sister role to her.

“It was very rewarding to see Eyelean welcomed into the herd and watch her grow and develop her funny personality as she finds her place with the rest of the giraffes.”

While the keeping team developed a special bond with Eyelean, a friendly distance was maintained as hand-raised giraffes can become dangerous and difficult to handle as they grow older.

“When Eyelean would approach Thula for milk, she would respond by kicking out and not allowing her to feed,” Tess said.

“We were faced with the crucial decision of whether to intervene and remove the calf from the herd to hand-raise, knowing that if she continued to be neglected by her mum she wouldn’t survive the night.”

After much medical and animal husbandry consultation, the decision was made to transfer the baby giraffe to a holding shed for intensive management.

Now, Eyelean is thriving in Waterhole with the herd and holds a special place in the hearts of keepers and visitors alike.

Classified as vulnerable to extinction in the wild, Eyelean marks an important contribution to a vital breeding program working to secure the future of the species.

Habitat loss, poaching and civil unrest has seen giraffe numbers plummet from around 155,000 in 1985 to just 95,000 in 2015. This equates to a decline of almost 40 per cent over three giraffe generations.

This startling and devastating decline saw the giraffe reclassified as vulnerable to extinction last year by the International Union for the Conservation of Nature (ICUN).

As a conservation charity, Zoos SA is committed to continuing our successful breeding program to ensure generations to come can enjoy the wonder of these tall, gentle creatures.

Monarto Zoo is proud to be the most successful giraffe breeding facility in Australasia, with Eyelean marking the 44th calf to be born at the zoo.

Zoos SA is also proud to have partnered with the Giraffe Conservation Foundation to raise funds for Operation Twiga III.

This project will have local groups in Uganda working to save the Nubian Giraffe, a unique subspecies that is vital to maintaining genetic diversity within the world’s giraffe population.