Little Nolean sticks her neck out 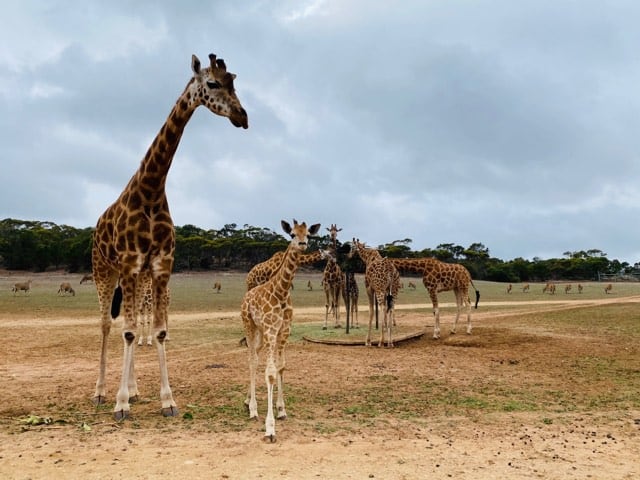 Little Nolean sticks her neck out

Ungulate keepers at Monarto Safari Park were celebrating this week as Nolean, the giraffe calf they have hand-raised since October, made her first long-legged steps back into the herd, after months of round-the-clock care.

Nolean was born in October last year to second-time mum Thula. Unfortunately, things for the pair didn’t work out and it soon became apparent that Thula wasn’t interested in mothering her newborn calf. Keepers took the decision to hand-raise Nolean by bottle to ensure her survival.

Things took a dramatic turn for the worse around Christmas time when Nolean became very ill. Keepers and vets kept a 24-hour vigil by Nolean’s side helping her to feed and be comfortable. Fortunately, in the last few weeks, Nolean has really picked up by taking on more regular feeds and interacting with two other giraffe in an off-limits area. Nolean’s improvement meant that keepers could re-release her back into the Waterhole exhibit, where she was born, and therefore join the rest of the herd.

On Friday, Nolean was reintroduced to the herd, at first taking a few tentative steps into the open paddock area. However, it didn’t take her long to find her feet and she was soon running around as if she owned the place. She was also very inquisitive to meet the Eland, running amongst them and looking as though she was having heaps of fun despite them not looking quite as amused.

Since her reintroduction, Nolean has really calmed down, quickly settling in with the giraffe including Asali, the adult giraffe who has taken on a role of Aunty. On Friday afternoon Nolean was seen sitting down amongst the herd, looking as if nothing was out of the ordinary. This settled behavior has continued, much to the relief of keepers.

Nolean’s reintroduction to the herd is a testament to the hard work and long hours that have taken place ‘behind-the-scenes’ to ensure her survival. As a conservation charity the cost of hand-raising a giraffe is significant, especially when you factor in the milk, supplements, the additional staffing hours required and Nolean’s veterinary care.

Nolean is now drinking 4.5l per feed at two feeds per day. The cost of this milk is $300 per 20kg with each bag lasting approximately two weeks. Additionally, she is also given Impact, a Colostrum supplement plus pre and pro biotics – essential to boost her health after her serious bout of illness.

Eyelean, Nolean’s sister, so called after she was injured by her mother and received a swollen eye and wonky neck in the process, was also hand-raised but took to being hand-fed immediately and was even happy to follow her keepers around. Eyelean moved to the newly opened Sydney Zoo in December 2019 where she has proved herself to be a great ambassador for her species.

Monarto Safari Park has one of the most successful giraffe breeding programs in Australasia. However, the population of giraffes in Africa has not fared so well. The number of wild giraffe has declined by 36-40% over the last few decades with an estimated 68,293 mature individuals remaining.

As well as building up its insurance population of giraffe at Monarto Safari Park, ZoosSA supports many international conservation programs including the Giraffe Conservation Foundation (GCF).

The decreasing giraffe population in Africa is referred to by experts as a ‘silent extinction’. Although we are often shown images of giraffe in Africa there are now less giraffe than there are elephants and, despite their grand stature, these gentle giants are disappearing right in front of our eyes.

A visit to Zoos SA Monarto Safari Park is just one way that people can take action and help to save giraffes like little Nolean and her wild cousins in Africa from extinction. Another is to adopt Nolean or, make a donation through the Zoos SA page.