Little horn pokes through with big message about species conservation 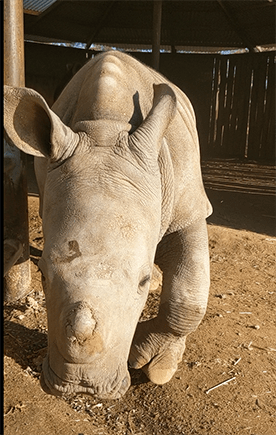 Little horn pokes through with big message about species conservation

Monarto Safari Park has captured a rare moment showing Southern White Rhino calf Eshe’s horn as it breaks through skin in a bid to grow into one as truly magnificent as her mum’s.

Captured by Geoff Brooks, Monarto Safari Park’s go-to Team Leader of Works, the two-and-a-half-month-old calf is seen approaching Geoff for a scratch and a pat – giving him the opportunity to zoom in close and show the horn poking through. It is hoped that vision of Eshe’s horn, as little as it is, will serve as a big reminder of the futility of poaching and the illegal rhino horn trade that is decimating the species.

The International Union of the Conservation of Nature (IUCN) reports there are approximately 10,000 mature Southern White Rhinoceros and that the population continues to decrease.

Zoos SA is also working with The Australian Rhino Project and other partners to bring a rhino sanctuary to life at Monarto Safari Park.  The project will see Southern White Rhinos relocated from Africa to Monarto Safari Park in 2022.

Members and visitors are asked to book tickets to Monarto Safari Park (up to four weeks in advance) online at www.monartosafari.com.au/tickets