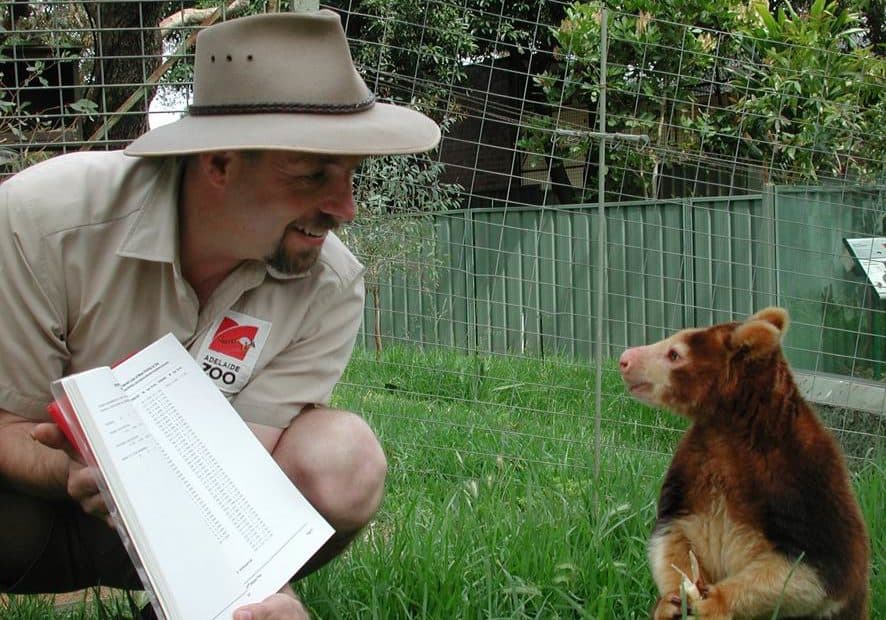 International Zookeeper Day is celebrated annually on the 4 October to tie with the Feast of St Francis of Assisi. It was St Francis of Assisi who is believed to have advocated that it was our duty to protect and enjoy nature. To mark this day, we are sharing the stories of three wonderful Zoos SA zookeepers at different stages in their careers.

Gert, Hayley, and Tom each have incredible stories and we hope that you enjoy reading them and that you are inspired by their amazing work.

When I was growing up I really liked going to Marine World and wanted to be a dolphin trainer but things weren’t that simple. Although I had a passion for animals I grew up with epilepsy and from around my mid teens it became clear that my options were going to be significantly reduced, as my epilepsy was no longer controlled by any of the medications available at the time. This meant working in an animal-focused industry wasn’t possible. My plans to study marine biology as a pathway to working with sea mammals evaporated. It’s a strange thing to feel gutted over a really long period of time. During this time my family were incredibly important and so with my dad’s help, I built my third aviary and continued to keep and breed birds instead.

Due to the fact I could draw and quite enjoyed it, I went to uni and became an illustrator. Perhaps more importantly this was a profession I could do sitting down, reducing the risk of injuring myself due to having a seizure. I also wasn’t able to get a license, complicating things further. Being an illustrator was not my first choice, but also not my last. Ironically I now shovel poo for a living

The severity of my seizures increased over time and after fracturing a vertebrae, something had to give. In 2006-2007 I had series of four brain surgeries which eventually stopped the seizures and in effect ‘cured’ me. I have a very vivid memory of talking with my partner, Alice, soon after when she asked me what I wanted to do for a living…..this was a seriously profound moment as It hadn’t yet occurred to me that I could, as of that moment, choose any career I wanted. Something I hadn’t been able to do since I was eleven years old.

“I reckon I wanna be a zookeeper” I replied. So that’s what I did, along with the support of a very understanding and patient Alice.

I got into zoo keeping through volunteering at Cleland. I think this is a great way to get into keeping as it gets you hands on husbandry experience and exposure to captive animal behaviour. It also alerts potential employees to your abilities -that’s how I got my first keeping job at Cleland before moving to Monarto Safari Park.

I’ve been at Monarto for 11 years now. I started off working with the Native fauna section before moving across to ungulates and then primates. In 2014, Alice, our two sons and  I moved to Darwin for a year where I worked at the Territory Wildlife Park as a Trainer/Presenter of the Freeflight bird show. This was and remains my dream job! It was in Darwin that my passion for native species was re-invigorated and on my return to the then Monarto Zoo, I started back with the native fauna section and I can’t imagine being anywhere else. I’m stoked on being a part of this team and everything everyone brings to it.

There’s a real element of creativity to being a keeper. There’s always more than one way to do things – a billion in fact. This applies to all facets of husbandry including enrichment, conditioning and exhibit design.

Pushing the limits of what is possible is where it’s at, that’s what I get buzzed on. Animals spend their lives pushing the limits of their species capabilities, their survival depends on it. It’s on us as keepers to try and match that. Thinking outside the box is a brilliant start and the easiest way to think outside the box is to avoid climbing into the box in the first place. They’re cramped and dark.

These elements of being a keeper can definitely be intimidating and sometimes be overlooked. But when you’re ready to put yourself out there and get amongst it. It’s one of the most rewarding parts of the job. When it all goes to plan (which it almost certainly won’t the first time) and has a positive impact on an animals welfare, its pure joy. I can’t think of a less fluffy way to say it right now.

In five years time I’d still like to be working with animals and maybe play a part in setting up a Freeflight bird show at Monarto that reflects it’s landscape, connection and culture – a place in the scrub unlike any other.

Gert Skipper started work as a zookeeper in 1976 in Copenhagen Zoo before moving to Adelaide in July 1980. He is due to retire this week after 41 years of working at Adelaide Zoo.

The first job I had was as a native’s keeper. Coming from Europe I found Australian animals such as kangaroos, koalas, tassie devils and wombats extremely exciting and exotic.

I then moved around the zoo working in the Nocturnal House before moving to Supervisor of Carnivores and Primates.

In 2003, I covered a maternity position as Acting Animal Records keeper overseeing the transformation of our animal record keeping to ZIMS  global real time Animal Records  platform. Zoos SA was one of the first adopters of ZIMS in the world and we still use it today.

My current role as Curator Collection Development C involves species management, updating policies and procedures and the planning of our collection.

To be a good zookeeper you need to have compassion, to love and care for animals and keen eye for understanding and observing animals’ behaviour. You need to notice the signals that they give you. It’s not a glamorous job and it involves dedication and understanding.

You also need an understanding family. I’ll never forget my wife coming home one day and only taking one foot inside the door before exclaiming: ‘What on earth is that smell?’ That day I had been working with skunks and one had sprayed me. I was fortunate that I was immune to the smell; she was not!

Zoo keeping has changed over the years, it used to be just feeding and cleaning and the occasional observation. Now, it’s also about animal behaviour, their welfare and providing enrichment and tools so that we can meet their needs.

A good zookeeper will be creative by using new foods, moving things around the exhibit and being aware of an animal’s changing needs. I don’t think there’ll be as much significant change in the next 40 years but who knows?

What makes a good keeper? Well, the best keepers have something special, a connection with animals that you can’t study for or purchase. I’ve seen a few keepers like this – they just have that nous.

I’ve never thought about doing any other career, even though the money is not always great no two days are the same. Animals surprise you and outsmart you most of the time!

Hayley completed her Cert III in Captive Animals in March this year with the Taronga Training Institute based at Adelaide Zoo.

I completed a BA in Animal Science in 2018 and then completed a Certificate III in Captive Animals in March 2021 with the Taronga Training Institute based at Adelaide Zoo.

The course has five weeks of theory throughout the year with trainers from Taronga as well as eight weeks of practical which are at Adelaide Zoo and Monarto Safari Park.

I really enjoyed the practical element as it shows you what the job is like. I found everyone I worked with to be so helpful, friendly and easy to get along with.

I started work as a casual at Adelaide Zoo in September first off working in the Nature Theatre team. My fourth day ended up with me presenting in a wildlife show! It was nerve-wracking but I did ok and the second time I had to do it I felt much better. I’m also working the birds round and helping with the food prep.

Yes, you do get a bit smelly and the unexpected does happen. For example, a wild possum got in with the Quokkas the other day and there was a bit of chaos. The possum eventually got out but I was surprised how quickly those Quokkas can move when they want!

If you want to be a zookeeper, go for it! Get your Cert III and don’t give up!