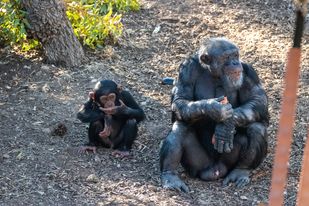 Keepers at Monarto Safari Park are today celebrating a very special birthday and anniversary – Chimpanzee Hope is two-years-old and her Dad, Tsotsi has held the position of alpha male for 10 years!

“Hope is an adventurous two-year-old who is always testing the boundaries,” said Primate keeper Hayley Lewis.

“In recent times Hope has been practicing her somersaults but has now moved onto flipping into hammocks.

“Hope’s mum Hannah is very playful and they can often be seen laughing as they engage in a game of tickle. One of Hope’s favourite games is to be thrown into the air by her mum and caught again.

Not content with a birthday celebration, there’s also another reason to party in the Chimpanzee troop. Hope’s Dad Tsotsi is celebrating a very important milestone. This week 31-year-old Tsotsi celebrates a decade of being alpha male of the troop.

Tsotsi arrived from Adelaide Zoo in 2009 to form a new chimpanzee troop at Monarto Safari Park rising in 2011 to alpha male. Despite a few challenges to his role over the years, Tsotsi has managed to remain in the position with key support from the female members of the troop.

Hope was named by world renowned primatologist Dr. Jane Goodall when she was just three-months-old.

As a conservation charity, Zoos SA works to help save chimps from extinction through involvement in international breeding programs, by supporting Tacugama Chimpanzee Sanctuary and the Jane Goodall Institute Australia.

Reservations and bookings for Monarto Safari Park can be made at www.monartosafari.com.au/tickets