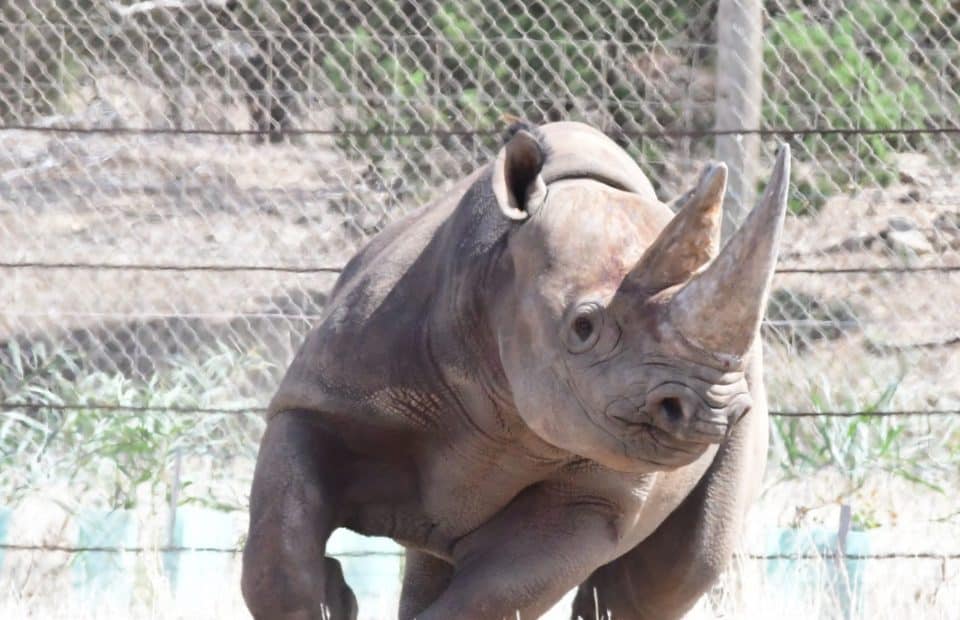 When a new exhibit opens at Monarto Safari Park, it is usually the staff that are the most excited.

And while there was definitely a buzz around the fence line at the new Black Rhinoceros exhibit opening this month, it was 17-year-old Sentwali who couldn’t contain his joy.

As keepers opened the gates to the new 5 acre paddock, 1,160 kilogram Sentwali, meaning courageous, lived up to his name and immediately began exploring the exhibit from top to bottom.

Sentwali was most pleased with his lovely new wallow, soon covering himself from horn to tail in mud and having a right old roll around in the grass.

Director of Monarto Safari Park, Peter Clark, said the project has been in progress for over five years so it was extremely rewarding for all involved to open the expanded space, which would not have been possible without the support and generous sponsorship of Gold Rhino and HardHat.

“It was such a big moment for us because it has been many years in the making,” he said.

“It was just fantastic to see Sentwali exploring the area. He certainly tired himself out after running around and exploring for so long.

“This is the first phase of our expansion plans for Black Rhinoceros here at Monarto Safari Park.

“There is a large space adjoining the new exhibit, which we plan to create further areas to house more black rhinos in the future, including females.

“As a critically endangered species, it is a very exciting and important conservation project and we hope that we can build an ex situ population to safeguard and act as ambassadors for their wild relatives.”

The expanded exhibit was meticulously designed specifically for the Black Rhinoceros with a wallow, two scratch posts, rocks, piles of logs and two poles to hang browse for enrichment.

The rhino also have access to a new shelter with a sleeping and feeding area and a shade sail to keep cool during the day.

Another feature of the new exhibit is a strengthened ‘meet and greet’ fence, which will allow interaction between males and females in the future.

Fence contact between male and female black rhinos is important to breeding success allowing animals to get to know each other, show their receptivity to mating, courting and finally helping keepers to know when to introduce the pair.

Visitors can see the Black Rhino in their new area from the Zu-loop bus, with Zoos SA also creating a new bus stop with a viewing track and platform to be opened in mid-2022.

“Both Sentwali and Induna are loving the new exhibit and they are settling in really well,” he said.

“Male Black Rhinoceros are solitary, so they won’t be in there together but they will be swapped over regularly so they can both enjoy the space.”

Induna and Sentwali came to Monarto from Taronga Western Plains Zoo in 2007. Induna has a sweet, friendly nature and enjoys regular interaction with keepers. Sentwali has more of a fiery personality and can sometimes be a little impatient, particularly at dinner time, snorting if he is kept waiting too long for his food.

Monarto Safari Park is one of only two Australian zoos that house the Black Rhinoceros species, which is classified as critically endangered in the wild by the IUCN Red List of Threatened Species.

There is thought to only be around 3,000 Black Rhinoceros left in the wild.

Once the most common species of rhino in Africa, the species has been in steep decline due to poaching for the illegal horn trade. In fact, since the 1960s it is estimated species numbers have declined by over 97 per cent.

While substantial inroads have been made to protect wild populations, breeding of ex situ populations have become an increasingly important tool for their conservation.

These populations help to educate people about the plight of rhinos in the wild and could also one day be released in safe areas to help boost wild populations.

As a not-for-profit conservation charity, you can support our work with Black Rhinoceros by visiting Monarto Safari Park and getting up close with the beautiful bulls during the Black and White Rhino Interactive experience.

For more information or to book your ticket, please visit www.monartosafari.com.au.