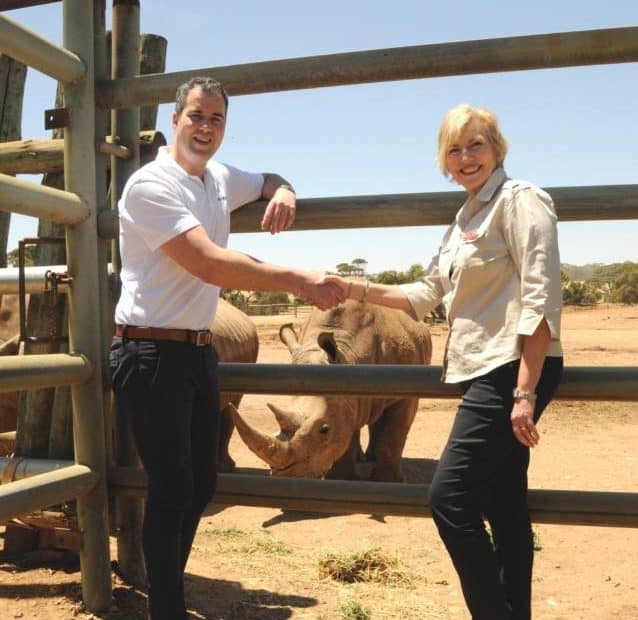 As a conservation charity helping to save animals from extinction, any support and partnership that helps us to carry out our vital work is heartily welcomed. That’s why Zoos SA is delighted to announce a partnership between Monarto Safari Park and Beach Energy, who has ramped up its current support to focus on the iconic Southern White Rhino crash and to help ‘grab extinction by the horns’.

Beach Energy’s support not only means a brighter future for Monarto Safari Park’s five rhinos Satara, Ibutho, Uhura, Umqali and Savannah, it also puts them one step closer to its aim of building an insurance population of rhinos in South Australia.

Working with the Australian Rhino Project, the current plans will see the future relocation of eight Southern White Rhinos from South Africa to Monarto Safari Park, adding to the Park’s current population of five. These new additions to the crash will ensure that there is a genetically diverse breeding group that can act as an ‘insurance population’ should the rhino become extinct in Africa.

Efforts to help the rhino are nothing short of vital. The number of rhinos in the wild is declining at such a rate that scientists predict they could be extinct by 2030.

With three rhino being killed by poachers per day, the threat of extinction is a reality. Being able to charge heard first into projects with Beach Energy’s support is crucial for ensuring that there is a genetically diverse breeding group that can act as an ‘insurance population’ should the rhino become extinct in Africa.

“Beach Energy is thrilled to support the Southern White Rhinos and enhance the conservation efforts around these beloved creatures so they can be enjoyed by future generations,” Mr Kay said.

“We are very lucky to have such a world-class facility in Monarto Safari Park right here on our doorstep, it is a great place for families to enjoy and learn about endangered and near-threatened animals like the Southern White Rhino.”

“Securing Beach Energy as a major partner is a coup for Monarto Safari Park and is great endorsement of our conservation efforts,” said Elaine.

“Beach Energy’s support is helping us to safeguard the future of Southern White Rhinos and is greatly appreciated.

“We can’t wait to welcome Beach Energy’s employees and their families to Monarto Safari Park and to introduce them to our precious rhino. We know they will love the crash as much as we do.”

Beach Energy’s support will also extend to visitors who will gain greater awareness of the plight of rhinos through visits and visitor experiences with our Southern White rhino crash: Satara, Ibutho, Uhura, Umqali and Savannah.

Today’s Teddy Bears Picnic saw Wang Wang and Fu Ni have some pawsome fun for their birthdays. Thanks to… https://t.co/6TCqD20rXN