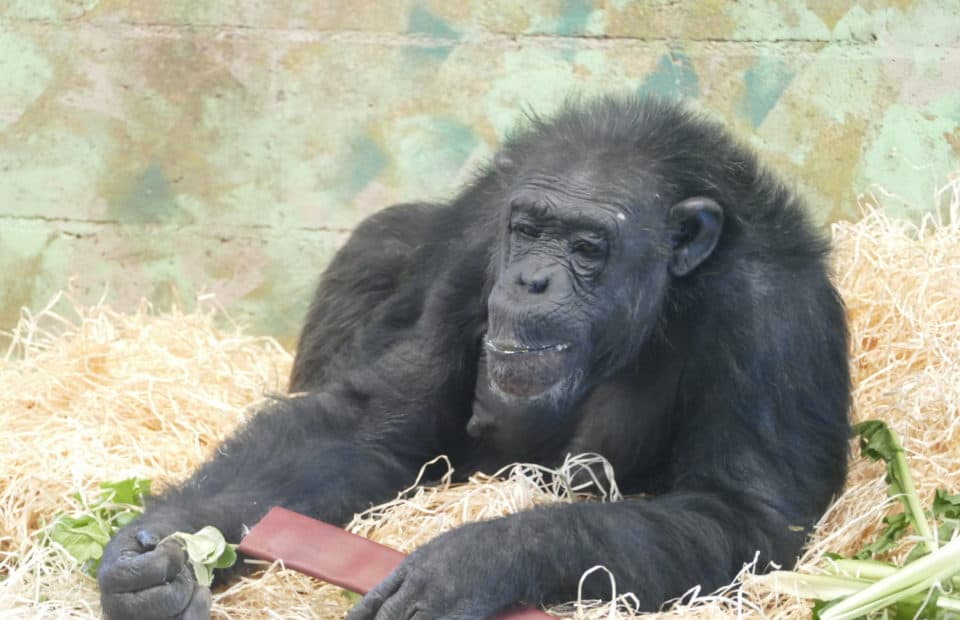 Monarto Safari Park is excited to announce that Galatea, our 22-year-old chimpanzee, is pregnant!

The first-time mum is in her second trimester and is expecting her bundle of joy in late March.

Senior Primates Keeper, Laura Hanley, said it was an emotional moment for their team when they discovered Galatea’s pregnancy test was positive.

“I cried, it was quite emotional, because we thought that it might never happen for her,” Laura said.

“I rang Louise (Assistant Curator of Natives and Primates) at home and there was a lot of excitement, particularly because it was Gali.

“She will just be the best mum and it is so special because she has been wanting more and more to be involved with the little ones.

“The most intimate bond is between a mother and her baby, so Gali will now experience that and become part of the nursery group with the other females.”

It was an interesting process confirming the pregnancy, with keepers designing innovative ways to ensure the test was accurate.

“We use human pregnancy tests, so we were waiting to see those two lines appear,” Laura said.

“We wanted to make sure that it was definitely Gali, so we had to invent some interesting contraptions to catch her urine and ensure it was from her!”

The team will monitor Galatea closely over the next few months and ensure she has everything she needs to nest when she is ready to give birth.

Galatea has been a strong aunt figure for the other female and infant chimps in the family unit at Monarto, which consists of 12 chimpanzees.

“In the last couple of years Gali has really come out of her shell thanks to the others,” she said.

“It will be really interesting to see the type of mother Gali is because each of them have their own unique style.”

The newest addition, Zola, is the third child of head female Zombi and the sister to Zuri and Enzi.

Galatea arrived at Monarto with Zombi in November, 2010 from Burgers’ Zoo in the Netherlands.

For more information or your tickets to visit Galatea at Monarto Safari Park please visit www.monartosafari.com.au.