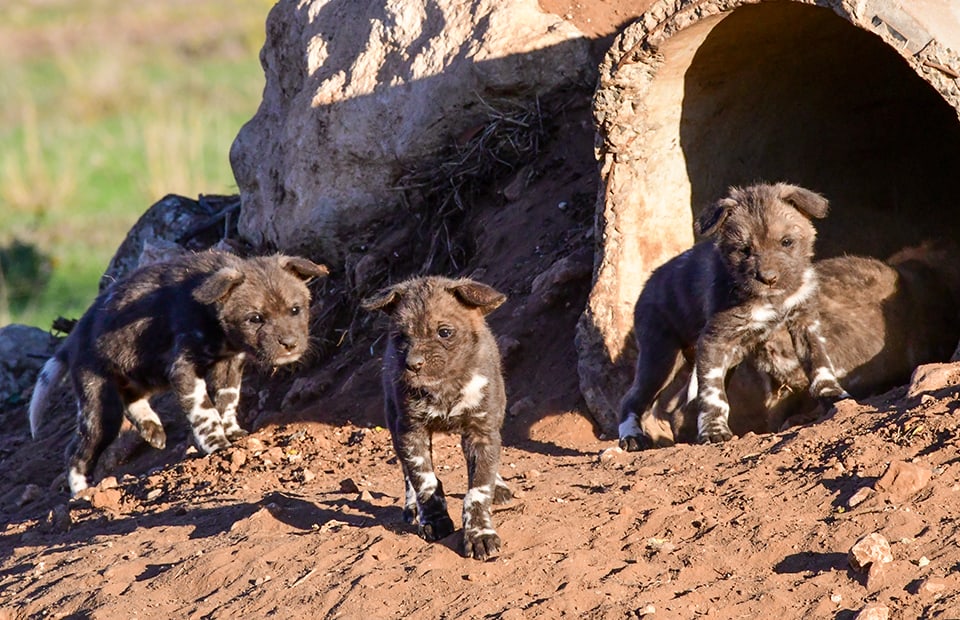 Born to mum Bulu in late April, the pups have become more adventurous over the past while, each day making it further and further out of the den.

Monarto Safari Park carnivore keeper Kat Ferres says the puppies have been a delight to watch grow so far.

“It’s been amazing to see these dogs grow into the curious puppies they are now,” says Kat.

“This species grows incredibly quickly with the dogs weaned at three months. Our puppies have already had their first taste of meat and are loving it.”

Rather than being fed meat from a keeper or sharing a carcass with the rest of the dogs, the little ones will receive regurgitated meat from other members of the pack.

African Painted Dogs are very social and have a rich, cooperative pack life led by a dominant pair, with many pack mates supporting the dominant pair and their offspring.

Other members of Monarto Safari Park’s pack including four-year-old brothers Onika, Baraka and Kamali have been observed playing with the new additions.

Some of you might remember that Bulu actually gave birth to a litter of eight puppies, with seven surviving up until recently.

Unfortunately, keepers had been monitoring one dog as it was very uncoordinated in its movements and wasn’t keeping up with the other puppies.

After being assessed by our skilled veterinary team, it was found the pup was suffering from hydrocephaly, a condition where an abnormal buildup of fluid in the brain can lead to compression and damage of brain tissue.

Sadly, the vet team found the pup’s condition to be incompatible with life and humanely euthanised it.

Thankfully, the six remaining puppies are strong, healthy, curious and being diligently attended to by Bulu.

African Painted Dogs are one of Africa’s most successful predators, hunting in large packs that pursue their prey in long open chases. Nearly 80% of all wild dog hunts end in a kill.

This species has a unique evolutionary line and is one of the rarest species on the African continent. Its ancestry can be traced back some 40 million years.

They once ranged through 39 countries with a population of more than 500,000 individuals that thrived through the turn of the twentieth century. Today, their numbers total less than 7,000 and their population is quite fragmented.

Bulu and her puppies are still spending a lot of time in the den so it’s not guaranteed visitors to the park will get a glimpse of the young family.

However, they are becoming bolder every day and keepers don’t think it will be long until they’re comfortable being in the exhibit full-time.

Thanks to our exhibit sponsor Hiline Home Modifications.