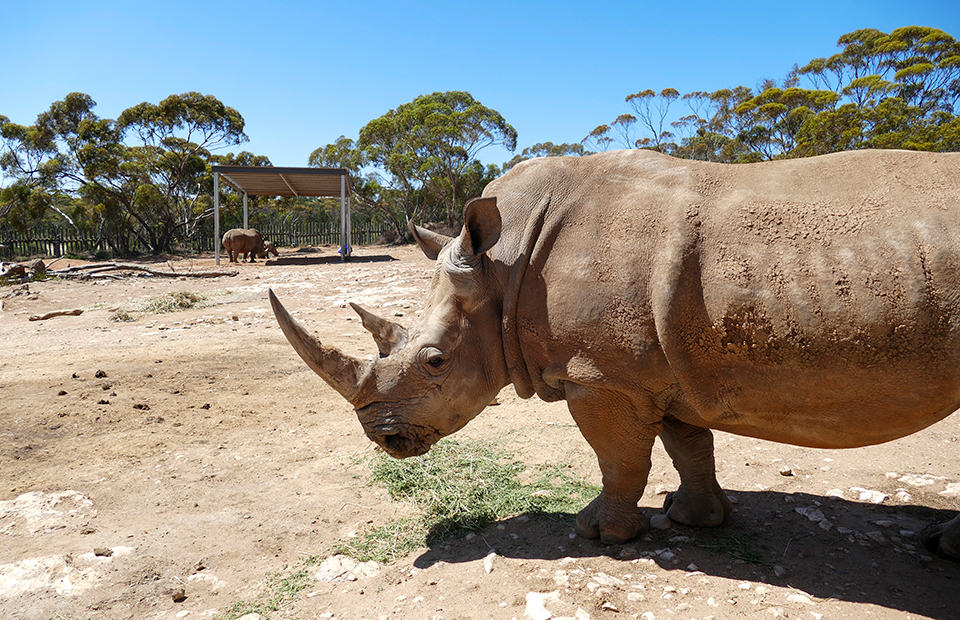 This week marks a rhino-sized anniversary – 20 years since Southern White Rhinoceros first arrived to begin the Zoos SA breeding program for the species.

Since then, Monarto Safari Park is proud to have bred seven calves and is now home to six individuals: three adult females, two adult males and little calf Eshe who was born earlier this year.

“Not only are rhinos an incredibly charismatic animal, they’re also representative of the vital conservation work zoos and parks do around the world.

“Our Anthony Taylor Rhino Quarantine and Management Centre is almost complete, which brings us one step closer to being able to house an insurance population of up to 40 Southern White Rhinos here at the park where they’ll be safe from poaching.

“To be able to have a space where we can grow the breeding program even more is not only exciting, but integral for our contribution to saving this species from extinction.”

Uhura arrived as part of a program known as ‘Operation White Rhino’, which included a huge amount of international collaboration, paperwork and a very lengthy quarantine period.

“There’s a saying that to import an animal into Australia, the paperwork must first equal the weight of the animal, and with Uhura and later rhinos this was no exception!

“Rhinos are fascinating animals – I feel very privileged to have known all 13 Southern White Rhinos who have called Monarto home over the years, and remember all of their distinct quirks and personalities.

“For example, we invited the media to Monarto to see Uhura arrive and opened the crate expecting her to rush out, but she didn’t move… The media eventually left. It was 24 hours before Uhura finally decided to exit the crate and move into her new home.”

“But there’s nothing more unforgettable than being there shortly after a birth and watching a newborn calf take their first shaky steps on skinny legs while trying to come to terms with their seemingly oversized feet.”

One of the biggest threats to the wild population is poaching for the international rhino horn trade, which commands a high value on the black market for alleged medicinal purposes.

This illegal trade has seen the incidence of poaching escalate hugely over the past ten years.

Rhino horns provide no proven medical benefit; the horn is made of a protein called keratin, which is also what makes up skin, fingernails, hair and hooves.

This alleged cure for a range of medical aliments has resulted in needless death of thousands of rhinos.

Surviving numbers are now thought to be less than 15,000 individuals, with experts predicting rhinos could be extinct within the next decade if poaching is not brought under control.

As a conservation charity that exists to save species like the Southern White Rhino from extinction, we’re proud to be working with The Australian Rhino Project, Taronga Western Plains Zoo and Orana Wildlife Park to bring 30 rhinos from South Africa to Australia, with the first arrivals planned to take place in 2022.

We also work closely with conservation organisations on the ground in Africa, including The African Ranger Association, Kruger National Park Honorary Rangers and Sera Conservancy in Kenya where we help support nearly 40 rangers and their families as they fight against the illegal poaching of dozens of species, including Uhura’s wild cousins.

Back home, visitors to Monarto Safari Park can catch a glimpse of our amazing rhino crash as part of our Zu-Loop bus tours, or during our behind-the-scenes Meet the Rhino Calf experience.

Our crash of Southern White Rhinos is proudly supported by our partners Beach Energy.