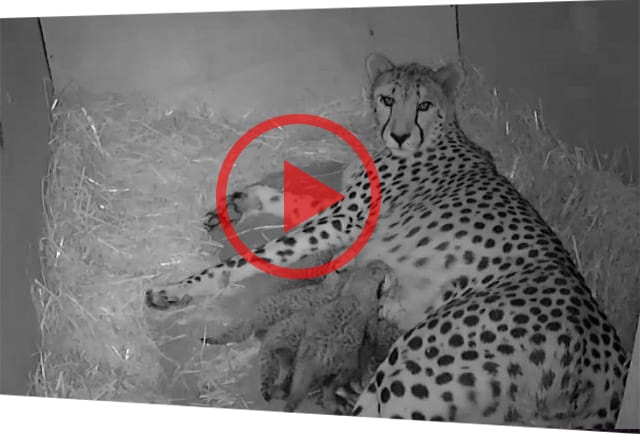 Five incredibly cute and feisty felines have joined the Monarto Zoo family, with the birth of a healthy litter of Cheetah cubs to first-time mum Kesho.

Born on Friday, 24 March, the almost two-week-old cubs are an exciting addition to the zoo family as they are the first litter to be born at Monarto Zoo since 2012.

Classified as vulnerable to extinction in the wild, the Cheetah cubs have a bright future ahead of them and mark an important contribution to the breeding program working to secure the future of this majestic species.

Carnivore keeper Michelle Lloyd said four-year-old Kesho was a doting mum and the cubs were doing very well under her attentive care.

“Everyone’s thrilled to welcome the new arrivals to our Cheetah coalition; it’s really exciting to see Kesho as a first-time mum,” Michelle said.

“She is doing a fantastic job caring for her young and tending to their every need.

“For the time being, we’re giving the family complete privacy and monitoring the cubs’ development via a security camera in the den.”

The litter is an important addition to the regional Cheetah population and our work as a conservation charity, with the cubs having the power to educate Australians about the plight of Cheetah in the wild.

The world’s fastest animal, the Cheetah is also Africa’s most endangered big cat with just 6,700 estimated to be remaining in the wild of eastern and south-western Africa.

“It’s devastating to think that in the last 35 years, we’ve lost almost half of the wild Cheetah population,” Michelle said.

“The decline is primarily due to habitat loss and fragmentation, and the killing and capture of Cheetah to protect livestock against predation.
“This decline makes breeding programs like ours incredibly important to secure the future of this species.”

Uniquely adapted for speed, the Cheetah is capable of reaching speeds greater than 100kph in just over three seconds, and at top speed their stride is seven meters long.

The cubs, which have not yet been sexed, will live with mum in a den in an off-limits area of the zoo until they’re old enough for their public debut in the not too distant future.

Mum, Kesho, was born in the last litter welcomed to Monarto Zoo in 2012. Dad, Innis, arrived at Monarto Zoo last year from National Zoo and Aquarium in Canberra and is on a breeding loan.

Do you want to adopt an animal or commit to conservation?